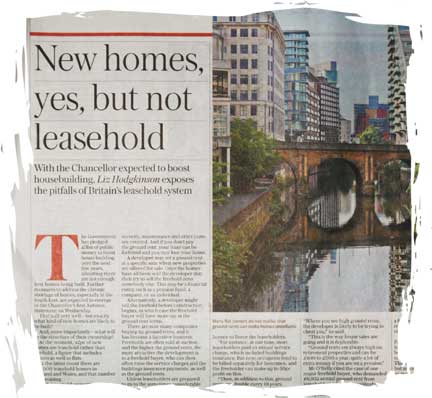 The Sunday Telegraph today questions whether the government’s £3 billion boost to house building should be for leasehold houses and flats.

Further measures are expected to be announced on Wednesday.

“In spite of attempts to reform the sector in revent years, critics say it is getting worse. And at the heart of the problem is the growing scandal of ground rents.”

“The leasehold gets nothing in return for the money paid.”

“Paying a ground rent is money down the drain. Putting it bluntly, if you buy leasehold you are a tenant not an owner.

“… Even major house builders such as Persimmon are now building leasehold houses. These can cost exactly the same as freehold houses, except that you never own them.”

Louie Burns, of Leasehold Solutions, is quoted saying that many leasehold owners try to “hush up” about onerous ground rent terms.

“Once you realise that you have fallen victim to these onerous terms, you tend not to talk about it because it hits the value of your property. It is the biggest legitimate scam in Britain.”

The article references Sir Peter Bottomley telling the All Party Parliamentary Group on leasehold that onerous ground rents while legal are “clearly undesirable” and “sharp practice”.