Donate
You are here: Home / Latest News / FirstPort Retirement is allowed into ARMA 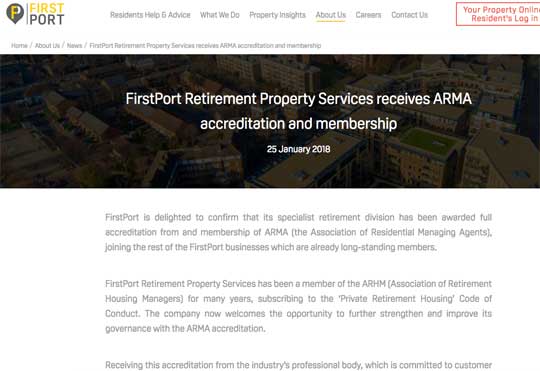 FirstPort, formerly Peverel, was responsible for systematically cheating pensioners in retirement sites which resulted in an Office of Fair Trading ruling of bid rigging in December 2014.

The feeble OFT inquiry resulted in no one being punished, although Peverel / FirstPort made a “gesture of goodwill” payment of £100,000 into the contingency funds of the ripped-off 65 sites.

BetterRetirementHousing.com and LKP have long suspected that FirstPort Retirement – the name change to FirstPort was thanks to our efforts – would be admitted to ARMA.

FirstPort is the biggest property management company in the country with 160,000 flats under management.

Peverel was once a modest Hampshire estate agent which took over the management of McCarthy and Stone sites and made its fortune.

It was owned by Vincent Tchenguiz’s interests until his wrongful arrest in February 2011 by the Serious Fraud Office.

It owns a portfolio of house manager’s flats on leases created in 2009 for not very good reason at all.

We have repeatedly questioned the lawfulness of this portfolio, but never had a very adequate explanation of why it exists.

Here are some highlights:

Eric Matthews, dealing with irritants aged 94 Interview with Eric Matthews on the Channel Four website During the Second World War, when Eric Matthews, 94, was an RAF squadron leader, he was used to chalking up downed enemy aircraft. Now he is celebrating another victory over a lesser adversary: Peverel, which has had to pay back £11,475.34p.

2005 to 2009 Peverel cheats pensioners at 65 site by installing Cirrus equipment through bogus tendering – Campaign against retirement leasehold exploitation alerts police, SFO and OFT, and The Times publishes article on December 4 2009 – But Office of Fair Trading gives Peverel “leniency” for turning itself in at some point in December 2009 – OFT starts investigation a leisurely 18 months later – July 2013 OFT admits the leniency deal with Peverel.

If Peverel Retirement is admitted to ARMA-Q, what message does that send thousands of cheated pensioners? – Better Retirement Housing

Ten months after being found guilty by the OFT of systematically cheating residents in retirement sites, Peverel Retirement is now lining up to join ARMA-Q. This is the new ethically enhanced membership scheme that ARMA hopes will demonstrate greater professional rigour in leasehold management.

Leasehold Roadshow heads for Leeds on February 27
Next Post: ‘Our David Wilson Homes leasehold house means we don’t own it, or the land, pay ground rent and consent fees to anonymous speculators in freeholds, often based offshore,’ Cheshire woman tells local paper »