Donate
You are here: Home / News / ARMA / Cooee! Peverel becomes FirstPort and heading for ARMA-Q … But will it be welcome? 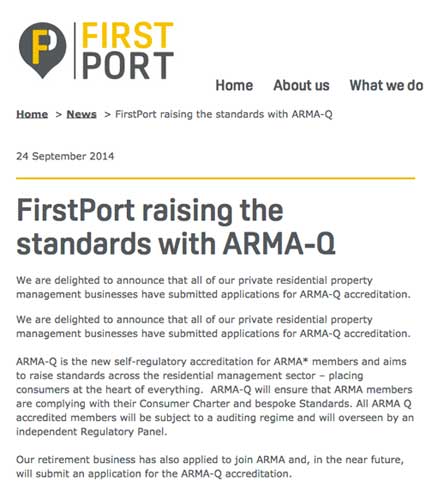 Like the unwanted guest at a party, Peverel has put on some outlandish new clothes and now seeks to crash ARMA-Q.

It is rolling out its new FirstPort brand, which means when you click on the Peverel website you are passed on to a new site.

The change in name is taking place a year after the Office of Fair Trading found that Peverel / Cirrus had been systematically cheating pensioners with a bogus tendering process.

As many as 65 retirement sites were swindled, the OFT discovered in a £500,000 investigation. One of three stooge companies making fake bids against Cirrus paid a fine of £1,777, while the two others went into liquidation and avoided any sanction.

Peverel and Cirrus themselves got off scot-free as they qualified for leniency in December 2009 by turning themselves in.

At that point, the group was headed by Nigel Bannister, whose new company Freemont Property Management is an affiliate member of ARMA.

We are sure that in the spirit of transparency for which he is now such an enthusiast, he will welcome us – again – recalling his words to the Times on November 9 2009, just a few weeks before Peverel confessed to price-fixing:

Not to be outdone, Peverel, or rather FirstPort, has its own grotesque way with words, announcing in its first press release: “FirstPort raising the standards with ARMA-Q”.

What standards would those be, exactly?

And what does ARMA get out of this (beyond holding its nose and trousering the cheques)?

Can the membership possibly be happy with Peverel in ARMA-Q?

That is, those property companies that haven’t been the subject of a half million pound OFT investigation, or that have not inexplicably ended up with a portfolio of retirement house managers’ flats, or had their insurance fiddles reduced to zero by the property tribunal.

Do they really want to end up in a club with this lot?

Quadrangle House residents seek to regain control of their RTM
Next Post: Countrywide ‘ripping off’ leaseholders, MP tells Commons. And it is given the boot by Bovis Homes