Donate
You are here: Home / News / ‘Our David Wilson Homes leasehold house means we don’t own it, or the land, pay ground rent and consent fees to anonymous speculators in freeholds, often based offshore,’ Cheshire woman tells local paper 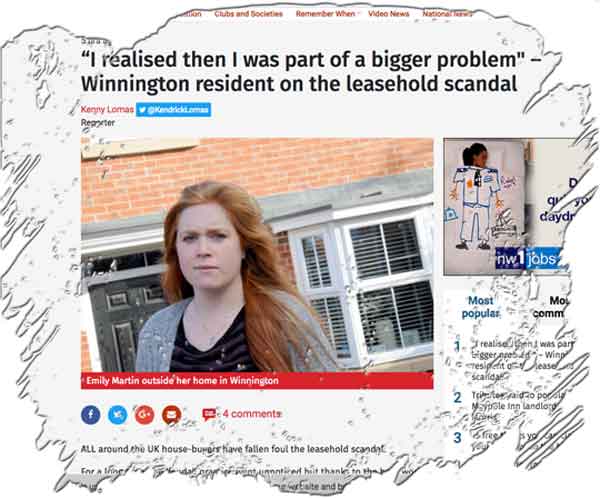 There is probably no better insight into the effectiveness of the #leaseholdscandal campaign than today’s article about David Wilson Homes Winnington Village in the Northwich Guardian.

It features an interview with Emily Martin, a first-time buyer in her 20s or early 30s – people’s ages used to be essential info for local reporters – and what she had to say was remarkable.

An ordinary homebuyer perfectly expresses the issues of leasehold, just as did Nathan Stewart, in national newspapers and the BBC, last week:

Emily Martin discovered that her freehold had been sold to Landmark Collections and then traded on, as happens so often in leasehold.

After speaking to neighbours, Emily Martin found that everyone else was in the same position:

“I realised then I was part of a bigger problem – that developers were unnecessarily selling houses as leasehold to make more money, and that once they have sold the plots, they often sell the freeholds on to various investment companies

“Because there is no law to prevent this, they don’t provide any notice to the homeowner, or give a first refusal to the purchaser.

“People think they are buying a house to own and be proud of, when in fact we are tenants sitting on land we do not own, facing extra charges not just for the ground rent, but from companies – often held offshore – who also charge extra fees for things such as permission to alter the house, re-mortgage or even own a pet.”

The article pointed out that the local Labour MP for Weaver Vale, Mike Amesbury, had raised leasehold in the first Prime Minister’s Questions of the new year.

“This is great news for future buyers, who can buy a house and own all of it and I’m really pleased for each and every one of them, but it does leave current leaseholders in a precarious position.

“At present, I live in a leasehold house on an early phase of a huge development, with all new houses being built and sold as freehold for the same price.

“So if I were to put my house on the market who would really want to buy it?”

It appears that Mr Amesbury is taking up the issue.

ALL around the UK house-buyers have fallen foul the leasehold scandal. For a long time, the ‘feudal’ practice went unnoticed but thanks to the hard work of campaigners and MPs, it is now firmly in the limelight.

The article had the usual denial of responsibility from David Wilson Homes :

“As a leading housebuilder, and in line with industry standards, it is not our practice to retain freeholds …”

What standards might this be, when considered in slightly wider detail?

National house builders have systematically cheated their own customers by dumping them in leasehold houses, and ripped off the rest of us too by abusing the Help To Buy scheme.

Taxpayers have poured billions into this scheme to get first-timers on to the housing ladder, only for the building firms to dump them in leasehold tenancies with a raft of income streams for dodgy investors who buy the freeholds.

“The homes at Winnington Village are advertised to customers as being for sale on a leasehold basis and all of our customers have access to independent legal advice throughout the purchase process.”

Around 100,000 home owners are stuck with leasehold houses and flats that are unsellable owing to the the #leaseholdscandal.