Donate
You are here: Home / Latest News / Who are Dublin-based Boardwalk Finance DAC and Jetty Finance DAC? Why do they own freeholds to people’s homes? And why are they based abroad?

Boardwalk Finance DAC and Jetty Finance DAC, which share the same offices in Dublin, emerge as large scale owners of UK residential freeholds, according to the Guardian today.

Jetty Finance DAC has £19 million of property assets, made a profit of £1.3 million but paid £3,000, according to recent accounts.

Boardwalk Finance DAC which owns Adriatic Land 3, which claims it has £18m-worth of freeholds with a turnover of £4.9m and a profit of £4.1m, also appears to have paid no corporation tax in either 2015 or 2016, according to the newspaper.

Who owns these entities and why they own the freeholds to thousands of homes in England and Wales – often bought by first-time buyers helped by the taxpayer funded Help To Buy scheme – is unknown.

The details emerged in a report today by the Guardian, which has turned its attention to the murky world of residential freehold investment today.

Its article can be read here: https://www.theguardian.com/money/2017/jul/08/homebuyers-who-owns-freehold-housebuilders-sold 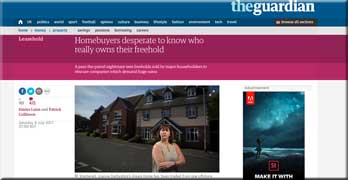 The article follows the All Party Parliamentary group meeting on Wednesday, where both Sir Peter Bottomley (Conservative, Worthing West) and Justin Madders (Labour, Ellesmere Port and Neston) raised the issue of freehold owners.

“The people who have bought these freeholds from developers are in my view going to face a significant amount of parliamentary attention. It will ask how they can buy a freehold for some £5,000 and then within a year or two ask a leaseholder to pay £42,000 to buy the freehold back.

“In my view that is unfair and socially irresponsible. Those people can expect to be treated like Philip Green if they don’t come to reasonable settlement very quickly.”

Justin Madders is undertaking detailed research to find out who the ultimate beneficial owners of residential freeholds are.

Owners of leasehold properties with onerous lease terms have no idea who the ultimate beneficial owners of the freehold are – as almost all hide behind nominee directors or are based offshore.

For six years, he worked for the sector’s acknowledged master, Vincent Tchenguiz – who was arrested with his brother Robert by the Serious Fraud Office in March 2011 (but who subsequently won a judicial review which ruled that the arrest was wrongful).

The Guardian does not mention that one of the directors of Long Harbour was Frank Sixt, a Canadian billionaire, who has been the group finance director of Hutchison Whampoa in Hong Kong since 1998. Hutchison Whampoa owns Felixstowe container port and the Three mobile network among many other UK assets.

Mr Sixt has 18 years experience in the telecommunications business, according to Bloomberg.

Will Astor’s dad Viscount Astor also has an interest in leasehold issues, attending the All Party Parliamentary Group meeting on leasehold reform on December 16 2016.

Whether this is because he is an investor in residential freeholders, or is just keeping an eye on his son’s interests, or because he has a hitherto unacknowledged concern for young first time buyers caught up in the leasehold game, is unknown.

The article quoted Joanne Darbyshire, who owns a Taylor Wimpey leasehold house in Bolton. She was told she could buy the freehold for £4,425, and the new freehold owners, Adriatic Land 2 (GR2) Limited, which bought the freehold in 2012, wanted thousands more.

“You have no idea who owns the land under your feet,” Miss Darbyshire tells the Guardian. “Your dream house is traded from one offshore company to another for tax reasons, or who knows what else?”

Consent fees for an extension rose from £300 demanded by Bellway to £2,440 from Adriatic Land 4 (GR 1) Limited, demanded by HomeGround.

The business practices of HomeGround is evident in another case of the owner of a Morris Homes house in Winsford, Cheshire, where HomeGround demanded £108 just to consider a conservatory request.

The same fee is demanded to find out the utterly preposterous (and irrelevant at this stage) price that the HomeGround freeholder would want for the freehold were a leaseholder to buy it.

(LKP advises all freehold purchases to be made by statutory process: https://www.leaseholdknowledge.com/category/fighting-back/lease-extension)

Since 2013, Adriatic Land 1 (GR3) Limited, of which William Waldorf Astor was a director until 2013, now has directors based in Dublin and is controlled by Jetty Finance DAC, which has £19 million of property assets.

The Guardian reports that neither it, nor Adriatic Land 3 Limited, whose ultimate controlling party is Boardwalk Finance DAC which shares the same office address as Jetty Finance DAC, have filed no corporation tax in some years.

“Administration fees for dealing with applications for landlord’s consent for matters specified in the lease are subject to a test of ‘reasonableness’ in accordance with statutory regulation.

“The HomeGround team is made up of law graduates who are all overseen by a fully qualified property solicitor. The cost of the work they carry out compares very favourably with any fees charged by any firm of solicitors, even those outside of London. It is easily forgotten that these are often variations to leases and are property transactions. These must be done in accordance with the legislation and need to be carefully and properly considered.

“HomeGround’s fees are also regularly benchmarked against other companies providing similar services. In addition to ensuring the fees are transparent, reasonable and justifiable, HomeGround’s aim is to be in the lower quartile of fees charged by market peers.”

‘Our David Wilson Homes leasehold house means we don’t own it, or the land, pay ground rent and consent fees to anonymous speculators in freeholds, often based offshore,’ Cheshire woman tells local paper