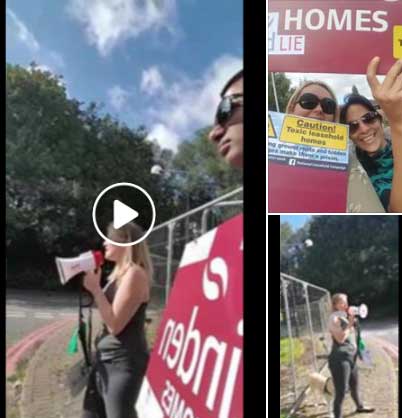 The protestors are believed to be leasehold house owners at the Kaleidoscope site in Dunstable, Bedfordshire, in September last year.

A number of frustrations – including those concerning the leasehold tenure of her property – prompted the leasehold owners to set up a Facebook group: “linden homes | leasehold scandal | complaints | galliford try”.

The matter was dropped after LKP involved Sir Peter Bottomley and Peter Truscott, CEO of Galliford Try, to calm matters down.

The leaseholders are indignant because they claim that Linden Homes sales staff told her that the freehold to the site was owned by a nearby college.

Ground rents at the site are £200 a year, rising in 10 years time with RPI and then every subsequent five years.

He urged a supported a buyers’ ban on buying leasehold houses from ban Persimmon at its Lake View site.

Mr Selous told the All Party Parliamentary Group on leasehold reform on April 19 his views on leasehold houses:

“For me, this is a spivvy financial director dreaming up on a wet Thursday afternoon how developers can get another stream of income. We should not be treating homeowners in this way, and I think it is absolutely disgraceful.”

“This practice offends my sense of Justice. It is despicable and I think we should call a spade a spade.

“I first became aware of this issue relatively recently because of two sites built on freehold land. One was in Dunstable with Galliford Try trading under the name Linden Homes, and the other in Leighton Buzzard with Persimmon.

“In the main, it is first-time buyers using the Help To Buy scheme.”