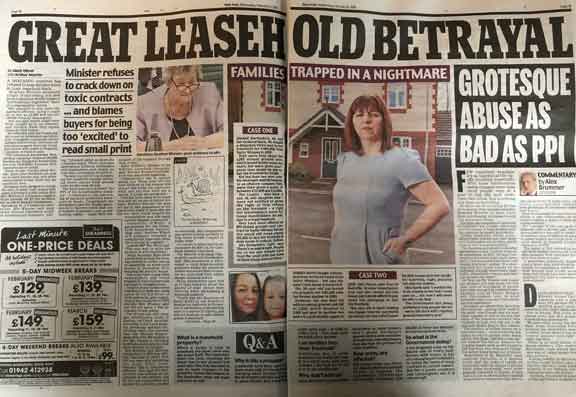 Where does one start with Housing minister Heather Wheeler’s evidence to the Communities Select Committee?

LKP described Mrs Wheeler’s evidence on BBC Radio 4’s You and Yours programme as “ill-informed”.

Of the ten or so MPs in the room, it was apparent that the housing minister knew the least about leasehold.

It was considerably less encouraging than the meeting with Communities Secretary James Brokenshire of the week before, where he renewed hope that the government was committed to reducing new ground rents to zero.

Mrs Wheeler’s performance was called a betrayal of leaseholders by the Daily Mail in a double page spread.

The full transcript is here: HeatherWheelerSelectCommittee 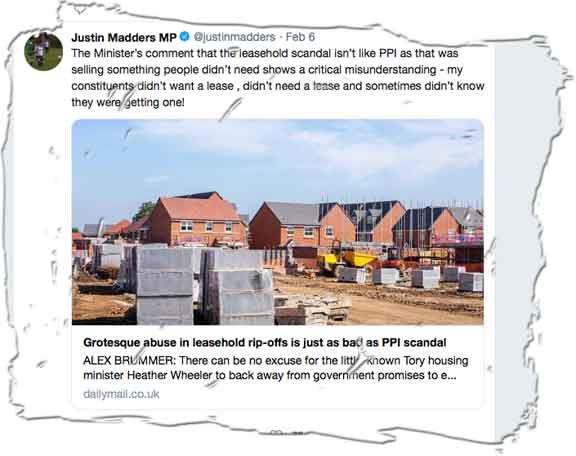 At last, the commercialisers in this hidden corner of the property market have had to defend their interests and explain their practices publicly.

Their preference is to hide behind lawyers and lobbyists.

The one clear message to the Select Committee comes from the Law Commission: it thinks that leasehold requires fundamental reform and this would be its preference.

Here are some clips of the hearing on Monday:

Minister will NOT crack down on toxic leasehold deals

MP Heather Wheeler dismissed claims of mis-selling in toxic leasehold deals Appeared to play down number affected saying it could be 12,000 not 100,000 She said she would prefer to rely on developers and property companies voluntarily giving families better terms than setting new legislation Are you trapped in a leasehold nightmare?

Few consumer scandals are as flagrant as the rip-offs involving leaseholds. With some homeowners being charged more than most people earn in a year to buy the land under their own home, this is nothing less than racketeering.

Leaseholders watching the progress of the government’s proposed changes to leasehold legislation have been on a roller coaster ride of highs and lows. The irrefutable low point came with Heather Wheeler’s car crash appearance before the select committee on Monday. It was a staggeringly fallacious display of distortion and chicanery.

Leasehold Solutions has labelled evidence by Housing Minister Heather Wheeler MP as ‘factually incorrect’ and a ‘disgrace’. Wheeler was questioned by members of the Housing, Communities and Local Government select committee at the final session of its inquiry into leasehold reform.