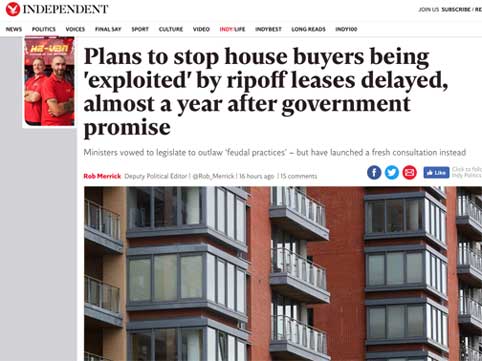 Sir Vince Cable, LibDem leader and a member of the All Party Parliamentary Group on leasehold has condemned the government inaction over the leasehold scandal.

It was another example of a government failing to tackle problems because it was “consumed by Brexit”.

“The Conservatives have developed a very bad habit of kicking cans down the road,” Sir Vince
told the Independent.

“And here we are again – another consultation instead of legislation, a government consumed by Brexit that talks rather than does.”

The Independent reports that “flagship” plans to stop house buyers being “exploited” by ripoff leases have been delayed, nearly a year after the government vowed to act.

“Last December, ministers announced they would outlaw leasehold agreements on most new homes and scrap ground rents on those that still went ahead in multi-flat buildings.

“The move followed protests over “feudal practices” that allowed ground rents to double every 10 years and for freeholds to be sold to investment companies – which then demanded tens of thousands of pounds to buy them.

“But instead of pressing ahead with the crackdown, James Brokenshire, the housing secretary, has announced a fresh consultation near-identical to one staged last year.”

Announcing the fresh consultation, Mr Brokenshire said: “Unfair ground rents can turn a homeowner’s dream into a nightmare by hitting them in the back pocket, and making their property harder to sell.

“That’s why I’m taking concrete action to protect homeowners and end those unscrupulous leasehold practices that can cost tenants hundreds of pounds.”

Ground rents for new leases would be capped at £10, he said – although last December’s announcement said they would be scrapped altogether.

Responses to the government consultation

Has Brokenshire trashed Sajid Javid’s reforms of leasehold?
Next Post: Ground rents to be allowed in retirement housing, says government »