… and instead of passing on complainants’ names to him, you can use mine! 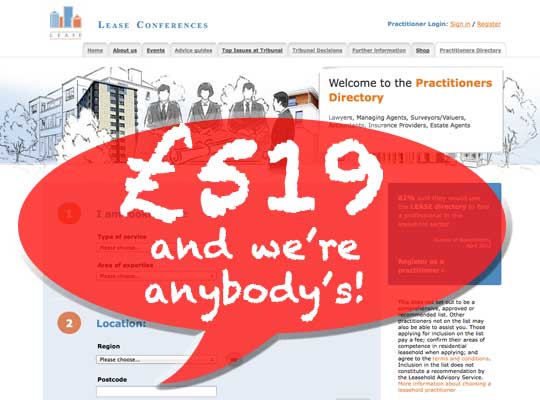 Trust appears on the LEASE website in the professional directory.

LKP has established, with a freedom of information request, that managing agents pay up to £519.99 plus VAT to be promoted by LEASE.

This means commercial professional services appear on the quango’s website – and presumably are consulted by desperate leaseholders – solely because they are paying money to LEASE.

Mire, a chartered surveyor, is a controversial property manager who until he resigned his judicial appointment in July also sat as a panel member on the LVT.

Had he not resigned, he would have been sacked, according to the Judicial Conduct Investigations Office.

This was “because he failed to observe the standards that could reasonably be expected of a judicial office holder and that this failing was sufficiently serious to justify his removal from office”.

In an email to Anthony Essien, the LEASE chief executive, Sir Peter Bottomley said: “If LEASE takes money or advertising from Benjamin Mire or any business with which he is associated I think you should end it without delay.”

It now emerges that Karen Darvell, whose property was managed by Trust, sought to complain to LEASE that the company was being promoted on its website. Before considering the complaint, Essien insisted on passing her identity to Mire.

Darvell is furious at this collusion by LEASE with a managing agent, whose conduct has been criticised many times in the property tribunals and would have resulted in his dismissal from his judicial appointment.

“It is preferable NOT to have my identity disclosed to Mr Mire and I don’t understand why this might be necessary,” says Darvell.

Sir Peter has written again to Essien this morning saying that LEASE can consider him as the complainant.

“Please name me as the complainant,” Sir Peter writes. “You may advise Mr Mire of my name. When there is news, please advise the others who have not given their consent.”

A number of complaints have been received regarding Mire and Trust Property Management, Essien informed Sir Peter on November 15.

“If at the end of that process it shows Mr Mire has not met any of our conditions or criteria then all options remain available to us, and this includes removing his firm’s entry from the Professional Directory,” Essien wrote.

Sebastian O’Kelly, of LKP, has asked LEASE what are the criteria for inclusion in the quango’s professional directory.

“listing are accurate and truthful, including the status of the firm;

“It beggars belief that practitioners in leasehold can ‘self-certify their capability’, pay £519 and then be included in the LEASE directory,” said O’Kelly.

“Is this really what taxpayers wanted when the Leasehold Advisory Service was set up?”

According to a LEASE satisfaction survey, “82% [of leaseholders] said they would use the LEASE directory to find a professional in the leasehold sector”. Whether they would still feel the same way knowing the directory is just paid for advertising is an open question.

LKP has long warned LEASE of the corrosive influence of its commercial activities. These include:

Instead of addressing these issues, LEASE decided to shoot the messenger. LKP was threatened in the summer with legal action by LEASE chairman Deep Sagar, who demanded the removal of the “Wibble-wobble” post, which criticised the quango.

This was followed by Sagar employing RMPI Solicitors to demand the removal of readers’ comments from the site. He also objected to LKP’s approach to making inquiries into his many and varied public appointments. RMPI, which said it was representing Sagar in a personal capacity rather than as LEASE chairman, sent two letters to LKP.

LKP has not removed any item from the website as a result of Sagar’s complaints.

Michelle Banks: silent over abuses, but ‘ARMA-Q will be good for leaseholders’
Next Post: High charges from Deacon property management. Advice needed »