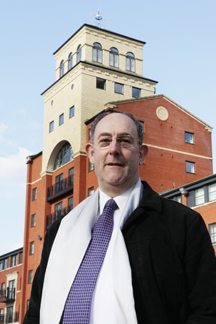 More than 100 residents at Wolverhampton city centre’s premier housing development were today(mon) celebrating victory in a battle with the landlord over a £16,000 repair bill – and are now planning to go back into action over a further £40,000 dispute.

A tribunal has ruled that people living at seven-storey, 64-flat Market Square should get their money back from London-based Chief and Ground Rents Ltd.

They had been ordered to pay the cash for a new fire alarm system after the old one was damaged in the 10 floods that hit the building in just four years. 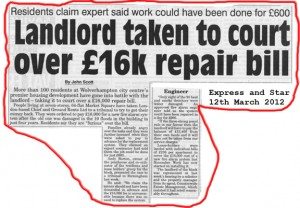 Families already angry over the leaks were asked to pay a total of over £16,000 in advance for the replacement system which an expert contractor told them could have been fixed for around £700.

Andy Burton, owner of the penthouse and co-ordinator of the residents and lease holders’ group for the block, said after receiving Monday’s  written decision from the Birmingham Leasehold Valuation Tribunal (LVT): “The 5 hour hearing resulted in a victory for us on all accounts, we are delighted with the outcome.

“The really good news is that the tribunal ruled that we should each receive a £236.47p refund and as the repair work will be covered by the insurance policy we will now not have to pay a penny for the recently installed new fire alarm system. The landlord will have to pay the balance of £15,300 himself.”

The three-man panel of the LVT decided that the only legitimate charge was a total amount of £716.40. They also ruled the landlord could not charge his court costs to the service charge account and had to repay Mr Burton’s court fees back to him.

Mr Burton said: “ I gave the freeholder the opportunity to consider the quotes for repairing the system but they went ahead with replacing the whole system. I had no option but to make an application to the LVT to ask for a determination on the cost.

“We now have a great opportunity to use our refunds to form a fighting fund to establish how much of the £40,000 rise in annual service charge was spent repairing flood damage”.

The last service charge bill for the block was 40 per cent higher and residents are concerned that much of this increase is due to the costs associated with flood repair work. Mr Burton says, ” We will be using our fighting fund to appoint our own forensic accountant and will then apply to the LVT for a further refund of our service charges. Already 80 per cent of leaseholders asked have pledged to donate 100 per cent of any credit they receive to the fund.”

The landlord of the block was represented at the LVT hearing by a solicitor and the Countrywide property manager who insisted they had acted reasonably throughout.

Barrister Justin Bates delays ANOTHER right to manage by nearly two years. Corrie and Man United stars among the ‘victims’