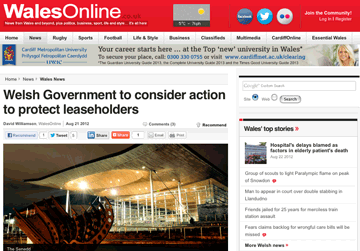 The CentreForum report into leasehold, A new lease of life: Reforming leasehold for the 21st century, has prompted  a reaction in the only other country in the world apart from England that has this flawed form of property tenure: Wales.

A report has appeared on Walesonline and a Welsh Government spokesman said: “We share many of the concerns raised in this report particularly in terms of regulation. We are currently working closely with Lease – the Leasehold Advisory Service – to help gather evidence of the scale of the problems with leasehold in Wales. This research will help us identify what future action, if any, is necessary on our part.”

Ahem … consulting LEASE on issues concerning leaseholders is not a great place to start. The government quango organises an annual conference which charges £320 a head and is trade show for barristers, solicitors and managing agents.

It even considered accepting referral fees from solicitors and surveyors for passing on details of desperate members of the public who contacted LEASE and who had potentially remunerative problems to sort out.

In short, its connection with the commercial interests in leasehold is unhealthy.

Anthony Essien, its director, complains that ordinary leaseholders do not turn up to conferences organised by LEASE. But more than 50 did turn up to the meeting last month in Worthing organised by LKP/ News on the Block. LEASE advisors were present, in fact.

In the Dispatches programme Lynne Neagle, of the Welsh Asembly, was featured taking up the cause of residents in Cwmbran.

The WalesOnLine report can be read here