Donate
You are here: Home / News / Dispatches reveals the cheating that lies at the heart of leasehold 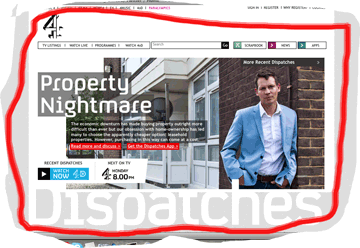 The long awaited Dispatches documentary last night, Property Nightmare: The Truth About Leasehold, was an excellent and welcome overview on the issues facing leaseholders.

The best part of it was the report on the plight of those leaseholders who have bought ex-local authority properties but where the block is still run by the council.

Profligate, ruinous expenditure by councils on property maintenance resulted in one pensioner on the Tremlett Grove Estate, north London, receiving a bill for £28,000, with no warning at all. This stupid bullying was more or less what one would have expected from a council – Islington –  but the revelation that many councils get kick-backs from contractors after a certain level of expenditure was shocking.

This is obviously a green light to abuse and over-expenditure. One hopes that this is stopped immediately – shouldn’t Shapps order an audit? – and Leasehold Knowledge Partnership will do its bit in the naming and shaming.

It was also gratifying to see our old favourite Charter Quay, in Kingston, Surrey, figure prominently. Here four Leasehold Valuation Tribunal rulings have won back £500,000 for the residents from their landlord, the Tchenguiz.

Dispatches should be congratulated for its open-eyed depiction of Vincent Tchenguiz, who some in the media – the Financial Times, for example ¬– seem to regard as a saintly victim (after being wrongly arrested by the SFO). Here viewers were reminded that he was a monetising landlord, whose associated companies provided a string of services at Charter Quay at inflated costs.

The section on the semi-derelict Earlham House, in Norwich, revealed that landlords Bellgold shared offices and directors with Hackwood Homes Limited, who had been appointed to refurbish the 60 flats. The local media appear to have taken this up.

Peverel made its inevitable appearance presiding over a truly squalid block of flats in Hounslow – believed to be Madison Heights – and awarding itself repeated handsome fee increases for doing so.

Although no longer owned by the Tchenguiz, Peverel still manages the family’s 200,000 freeholds, which are up for sale, and has close dealings with them. If new owners don’t like the management company and it gets the boot, Peverel will lose more than half its business.

This is worth bearing in mind when Janet Entwistle, the new chief executive, bangs on about serving leaseholder customers – they are pretty marginal compared with her freeholder employers. But this was not an issue raised on Dispatches.

Finally, there was an interview with Grant Shapps, the Housing Minister who dumped Labour’s protections of leaseholder funds when he came to office and is the single obstacle to leasehold regulation and reform.

He said he would be looking “very, very carefully” at leasehold abuses.

But the interview did not explore Shapps’ perverse and isolated stance on leasehold reform, which he has rejected on grounds of costs for landlords. This is untrue as the British Property Federation supports regulation. The interview was the weakest part of the programme and has generated criticism on Twitter.

Nonetheless, Dispatches deserves praise for raising this issue and presenting a raft of information in an accessible fashion. It has hugely helped the cause of those of us who want to reform this truly crap form of property tenure, and expose those who exploit its many opportunities to cheat people.

‘Some of the worst spivs in property are in leasehold,’ LKP tells The Times

Lonely Shapps: the only one who doesn’t think there is a need for leasehold regulation

Shapps: ‘I have not ruled out making changes to leasehold’