Donate
You are here: Home / News / McCarthy and Stone replies to Dispatches exposé 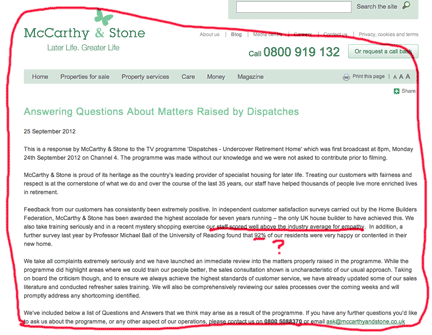 McCarthy and Stone has replied on its website to the exposé carried out by Channel Four’s Dispatches on Monday evening. You can read the page here

It says: “Treating our customers with fairness and respect is at the cornerstone of what we do and over the course of the last 35 years, our staff have helped thousands of people live more enriched lives in retirement.”

Using an undercover pensioner ‘spy’, Dispatches revealed that the McCarthy and Stone’s sales team urged would-be buyers to sell their houses in a complex part-exchange scheme.

It cited the example of Marion Bowley, of Weston Super Mare, who was offered £140,000 for her family house in McCarthy and Stone’s part-exchange deal. She declined, and sold it privately instead for £50,000 more.

The undercover ‘spy’, supposedly living in a four-bedroom terraced house in Worthing, was attempting to buy a flat at Cherrett Court, in Bournemouth. But the part-exchange may have left her £65,000 worse off had she sold her house for the sums the most optimistic estate agents valued it at.

McCarthy and Stone use a third party, unrelated company to value and purchase the house, although how the proceeds are divided up is unclear.

McCarthy and Stone says “… it is important to note that the three estate agent valuations Dispatches obtained for the valuation of the property in Worthing varied by some £50,000. A property is only worth what someone is willing to pay for it, which is ultimately determined by the market. Once the valuations are received, the part exchange company will make an offer to purchase the property. In some circumstances, McCarthy & Stone may make available an additional sum to increase the overall part exchange offer but we [sic] this is not always the case.”

On the website McCarthy and Stone asks the Q&A what is the relationship between McCarthy & Stone and Peverel?

Until 2010, management services in McCarthy & Stone-built developments were provided by Peverel, who are one of the largest property management companies in the UK.  Peverel had originally been part of the McCarthy & Stone group before it was sold in 1993. Since this sale, McCarthy & Stone is not linked in any way at all to the Peverel Group of companies.invites “

It did not add that Peverel was sold off after McCarthy and Stone launched a disastrous £800,000 libel action against the Daily Telegraph in 1991.

John McCarthy, the legendary founder of the company – who sold McCarthy and Stone for £1 billion and now owns Churchill Retirement Living – writes about the court case in his memoirs, Building a Billion.

“One area of criticism was that there was a perceived conflict of interest between McCarthy and Stone and Peverel. In 1993 e sold Peverel for £30 million to its management through Electra Investments.”

After the disastrous Tchenguiz ownership of Peverel – he bought it for £300 million in 2007 and it was sold by administrators for £50 million earlier this year – the buyers turned out to be … Electra Investments (with another one Chamonix).

John McCarthy then adds: “Interestingly, in the formative days days of us moving into the provision of sheltered housing in the private sector, a number of institutions including Housing Associations were not interested in taking on the management. They seem to have missed out.”

McCarthy certainly knew there were riches to be had in managing retirement developments.