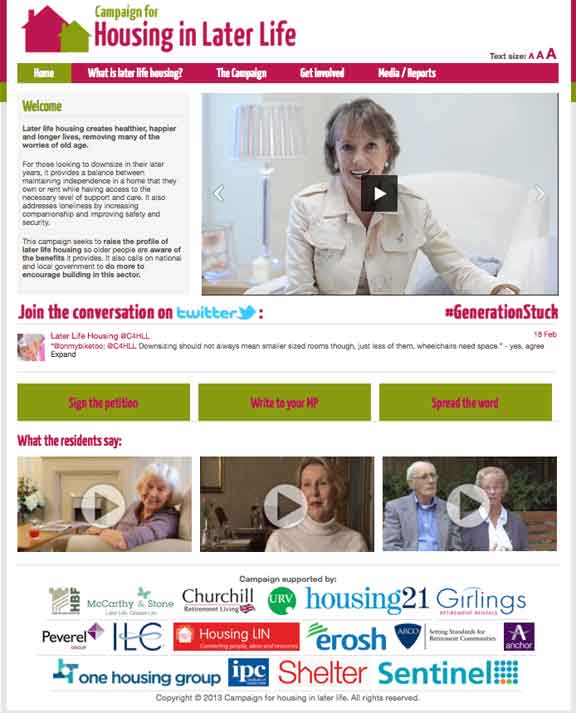 The Campaign for Housing in Later Life has been traced back to the Bournemouth headquarters of McCarthy and Stone.

The website, which seems to have been started last autumn, has a registered IP identification that uses the same postal address as the retirement leasehold developer.

The message of the campaign is to blame planners for the lack of retirement housing supply. It wants pressure on local authorities to approve schemes; the Help to Buy scheme to be extended to retirement leasehold and to ensure the new Community Infrastructure Levy “considers the viability issues”.

The message of the Campaign for Housing in Later Life is written in large red letters on the site: “Planning regulations do not make it easy for providers to build new later life housing, which is why so few schemes are being built.”

“This is utter nonsense,” says Sebastian O’Kelly, of LKP / Campaign against retirement leasehold exploitation. “Planning has almost nothing to do with the crisis in retirement housing provision.

“Schemes have not been sold during the credit crunch because there has been almost NO demand. Nor have developers done much construction, either.

“Unjustifiable practices on the part of developers, freeholders and management companies – well attested in the courts, by the Office of Fair Trading and in Parliament – have eroded trust in the sector.

“This is the crisis, and it is entirely the result of short-sightedness and greed.”

The Campaign for Housing in Later Life makes no reference to anything amiss in the sector at all.

Last December the Office of Fair Trading completed a four-year investigation into Peverel running a price-fixing cartel in retirement sites where the elderly and vulnerable at 65 sites were the victims.

The OFT (now the Competition and Markets Authority) was sufficiently disturbed to mount an inquiry into the whole of leasehold management, reporting in September.

The OFT – again! – reported in July 2012 on the issue of fees for subletting and exit fees on sale in retirement leasehold. Written into the leases by developers, there were “likely” to be unfair contract terms.

As well as stealth clauses in leases, consumers also face predatory practices from property managers, attested repeatedly in the courts. Here a tribunal rules on Peverel’s “arrogance” and “intentional hiding of information to which residents would have been entitled” by doling out contracts to its own subsidiaries.

The Commons has debated appalling conduct in the retirement leasehold sector, and a string of freeholders and managing agents have been named.

Every effort is made to prevent pensioners exercising their right to manage. Here a freeholder delayed the successful application for two years by playing the system and appealing all the way to the Court of Appeal.

McCarthy and Stone manages the few, newer freeholds itself and in November 2013 sacked Peverel from 25 sites.

This return to self-management repeats the set-up that existed until the mid-1990s, when Mc&S sold Peverel after a series of controversies.

These included a failed £800,000 libel action against the Daily Telegraph in 1991. More here

McCarthy and Stone featured prominently on Channel Four Dispatches in September 2012. Its part-exchange purchase scheme where the elderly trade in the family home for a leasehold flat was scrutinised.

Under former owner John McCarthy, it pioneered retirement living in the UK. The sale of McCarthy and Stone revealed the property/ banking scandal at its height and the developer is still deeply indebted to Lloyds.

HBOS Banker Peter Cummings is banned for life as a result of this deal. More here

The worst practices are to be found in upmarket, small-scale retirement village complexes, where Campaign against retirement leasehold exploitation is aware of families who have lost hundreds of thousands of pounds after making disastrous purchases.

Sir Peter Bottomley, the Conservative MP for Worthing West, claims that there is criminal conduct in leasehold, and predicts ruined professional reputations among lawyers, surveyors and accountants who play the leasehold system, especially when exploiting the old and the vulnerable.

A healthy retirement housing sector has never been more needed, but that is certainly not what we have at the moment.

Campaign against retirement leasehold exploitation is always available to discuss these issues with developers, freeholders and management companies, as well as government and the regulatory bodies.

The Campaign for Housing in Later Life does not appear to be a serious effort to engage with these issues at all.

‘Five million leaseholders is a lot of votes’, the Lords are told
Next Post: Survey on leasehold flood insurance