Donate
You are here: Home / News / McCarthy and Stone / Shelter ‘dumps’ the Campaign for Housing in Later Life 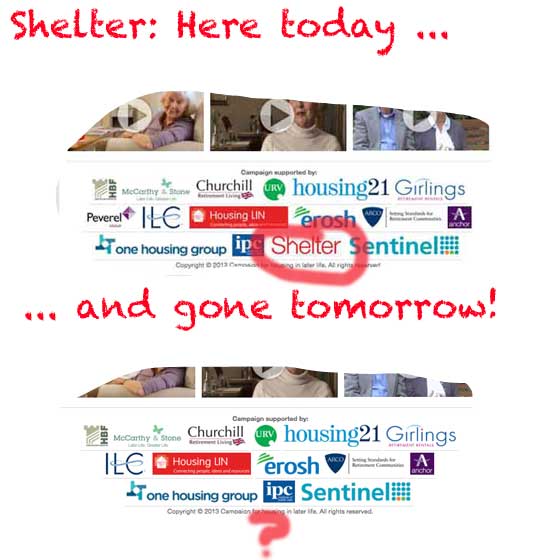 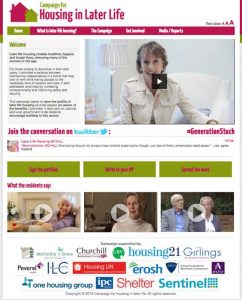 The charity Shelter appears to have ceased involvement in the ‘Campaign for Housing in Later Life’, which Campaign against retirement leasehold exploitation revealed on April 9 registered its website to the address of the Bournemouth HQ of McCarthy and Stone.

The Shelter logo that appeared on the campaign’s website has been removed.

Since publication by Campaign against retirement leasehold exploitation, the campaign has moved its website registration address to the Home Builders’ Federation in London. (See images below)

Sebastian O’Kelly, of Campaign against retirement leasehold exploitation, wrote to Shelter’s chief executive Campbell Robb on April 8 expressing his concern that the charity was involved in a lobbying exercise by retirement housebuilders.

The ‘Campaign for Housing in Later Life’ urges more planning acceptance of retirement living; a reduction of the Community Infrastructure Levy for “later life housing”; and an extension of the Help to Buy scheme to older people.

In short, it is a wish-list for developers, without a hint that there is anything amiss in this sector.

Shelter today confirmed that it had removed the logo:

“We have limited resources and at present are not focussing specifically on older people’s issues and have no plans to in our current strategy, and we have increased our opposition to Help to Buy.”

This is a weak response.

It appears that Shelter got suckered into this ‘campaign’ and changed its mind after Campaign against retirement leasehold exploitation provided information about the sector that is readily available with a little Google-ing.

For example, the three OFT inquiries, numerous property tribunal decisions, debates in Parliament, TV documentaries and press reports. Campaign against retirement leasehold exploitation, which is run by volunteers, is not sympathetic to the excuse of ‘limited resources’.

Shelter has paid staff who should have seen this campaign for what it is – house builders’ lobbying for easier planning, basically – and avoided it with a barge pole.

Planning is not a serious issue in retirement housing. The retirement house builders were not clamouring for easier planning during the slump: they weren’t building anything, nor were banks lending.

Retirement housing is in crisis because of the short-sightedness and greed of developers, freeholders and property managers who have left the sector with a toxic reputation.

Primarily, house builders must stop seeing the elderly as a long-term meal-ticket.

Leases should not have monetising opportunities; all sites should have resident management companies; and residents should choose themselves who cares for them.

The message to them should be: Build and go away!

Come on, Shelter! Don’t demand more housing without addressing leasehold’s many, many defects …