Donate
You are here: Home / Latest News / Come on, Shelter! Don’t demand more housing without addressing leasehold’s many, many defects …

For some years, LKP has been pleading with the homeless and housing charity Shelter to do more to support the problems faced by leaseholders.

For example, the arbitrary loss of home and destitution faced by lease forfeiture should surely be a concern? Forfeiture means total loss of the asset, offering a cash windfall to landlords, and has no place in property disputes.

Absolutely NO ONE in the leasehold world defends this harsh regime, which is far more severe than the criminal courts (where mortgage fraudsters have scrupulously been returned their initial capital).

We reckon forfeiture occurs between 50 and 100 times a year, but it is threatened routinely in cash disputes by freeholders. No one has accurate figures and when Emma Reynolds MP, the former Labour shadow for DCLG, kindly asked on our behalf she was fobbed off last March.

When we try to interest Shelter in leasehold injustices, it replies that it needs to foster its resources to concentrate on other housing and homeless issues.

Yet as an organisation whole-heartedly backing a massive increase in housing, why isn’t Shelter concerned with the legal tenure involved?

Here is Shelter’s chief executive Campbell Robb saying what he would do if he were prime minister for a day. Building more houses is number one.

Almost all new homes in London are leasehold, and it will hugely increase as the UK becomes a nation of flat dwellers.

With an income of more than £50 million a year, Shelter is not a small organisation. Yet it seems unaware that leasehold homes and socially rented flats (many more of which will become right to buy homes in the near future) represent 25% of our housing stock.

Shelter seeks donations claiming to help millions of people a year with “expert housing advice”. If you have a problem with your house they seem to be able to help, but if you are in a leasehold flat you’re stuck with us.

We have urged Shelter to attend the all-party parliamentary roundtables LKP organises. 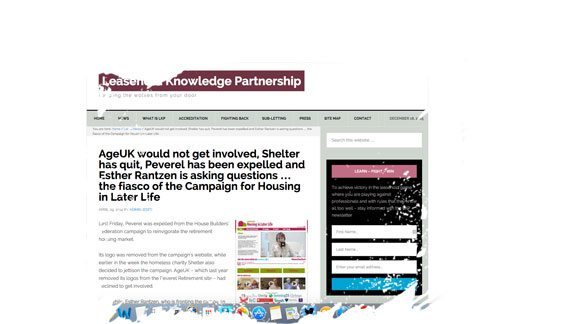 We think slightly more commitment is needed. So if you are involved with Shelter, or thinking of donating this Christmas, please highlight the importance of leasehold issues.

It is bad indeed that the only mention of Shelter on our website (April 2014) is the charity’s ill-considered involvement with the Campaign for Housing in Later Life – a stooge organisation funded by the House Builders’ Federation, with a website originally registered to the HQ of McCarthy and Stone. Its purpose was to urge easier planning.

Shelter quickly abandoned the campaign, and insisted on the removal of its logos. The campaign appears to have fizzled out.

Shelter’s policy contrasts with the useful engagement of AgeUK, which wisely declined to be involved with the Campaign for Housing in Later Life and which makes a very welcome contribution to the debate on retirement housing.