Donate
You are here: Home / News / FirstPort / AgeUK would not get involved, Shelter has quit, Peverel has been expelled and Esther Rantzen is asking questions … the fiasco of the Campaign for Housing in Later Life 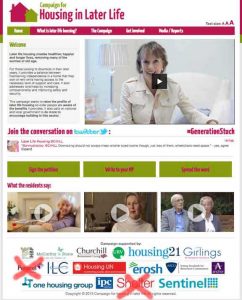 Its logo was removed from the campaign’s website, while earlier in the week the homeless charity Shelter also decided to jettison the campaign. AgeUK – which last year removed its logos from the Peverel Retirement site – had declined to get involved.

The HBF has expelled Peverel from involvement in the campaign because of the OFT ruling in December last year that its subsidiary Cirrus had run a bogus tendering operation to win business for warden call and electronic door entry systems.

Even though Campaign against retirement leasehold exploitation had long reported the swindle to the authorities – and the Times had even reported it – the OFT granted Peverel “leniency” on the fiction that it had somehow turned itself in. The property manager got off scot-free, although it has made a £100,000 “goodwill” payment into the contingency funds of the sites affected.

Stewart Baseley, the executive chairman of the HBF, has explained his decision to expel Peverel from the Campaign for Housing in Later Life in an email to a Campaign against retirement leasehold exploitation reader:

“In light of the OFT’S recent ruling on Peverel’s breaches of competition law, the campaign partners decided to disassociate Peverel from the campaign and the company’s logo will shortly be removed from the website.

“This was the sum total of Peverel’s involvement with the Campaign for Housing in Later Life, but because of seriousness of the OFT ruling – albeit some years ago and while the company was under different management – we reached the decision that it was no longer appropriate for them to have such a link with our campaign.”

It is astonishing that Peverel was even admitted to the campaign, given the OFT ruling of December 6 last year.

Yesterday, the Campaign for Housing in Later Life was discussed at a meeting between Campaign against retirement leasehold exploitation and Labour’s shadow housing minister Emma Reynolds, the MP for Wolverhampton North East, hosted by Jim Fitzpatrick, Labour MP for Poplar and Limehouse.

Coincidentally, Reynolds had earlier met McCarthy and Stone, the retirement house builder that is principally backing the campaign.

The Campaign for Housing in Later Life has a narrow agenda to encourage easier planning rules for retirement developers.

It does not address problems in the sector well attested in OFT reports, numerous court records and debates in Parliament, where retirement freeholders and managers have been named.