Donate
You are here: Home / News / House of Lords / ‘Five million leaseholders is a lot of votes’, the Lords are told

The House of Lords had another short debate on leasehold issues last Thursday and urged the case for reform to benefit five million leaseholders.

The debate was initiated by by LibDem peer Baroness Maddock, who said “further reform is still needed and is very much a live concern for the millions of people living in leasehold properties”.

“The majority of new homes being built are flats, bringing the whole matter of leasehold further to the fore. The current system vests too much power in the hands of freeholders.

“As a Liberal, I always want to devolve power to as many people as possible, so I want to see leaseholders having a proper say in the management of their homes.”

Baroness Maddock said that right to manage was a “a little known provision, and backed the think-tank CentreForum’s leasehold report which urged that information about right to manage be included in service charge demands”.

There was also backing for a renewed look at commonhold tenure, and the Leasehold Knowledge Partnership, with Sir Peter Bottomley, is hosting a Westminster round-table on the subject on June 26.

“CentreForum has proposed that in order to build a critical mass of commonhold properties, and to establish the system as part of the norm, all new blocks of flats built after 2020 should be sold as commonhold,” said Baroness Maddock.

Baroness Maddock was concerned about leaseholders being charged for improvements to their properties, which benefit freeholders twice. Once when they demand an initial charge, and again “because, invariably, the improvements increase the value of the property”.

“When the lease is then renegotiated or sold at a higher value, the freeholder benefits. CentreForum has proposed that the right to charge for permission to make improvements should only be available when the freeholder can prove that the charge requested would reduce the value of the property.” 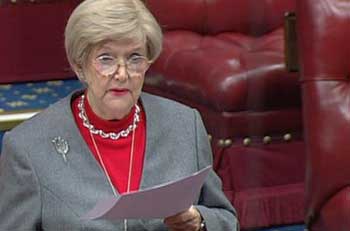 “Even in political terms, people should be aware that 5 million votes are worth having. It is important.

She added that the “problem with leasehold [is that] people really do not understand it until they are already caught up in it, particularly if they are caught up in it in the wrong way, because they did not look at the lease before signing it or they were so thrilled with what they found that they put aside any worries about the future.”

Baroness Gardner described her own frustrations with a leasehold flat, which she bought for “the day when I could not manage stairs”.

“At the time, all those years ago, we had a residential porter who took any parcels, let people in and did all sorts of useful things.

“What happened? The head lessee became a person who was interested only in making a profit out of it.

“They decided that the flat which the caretaker was living in was too expensive for that money to be wasted like that, so they fired the caretaker and now have someone who comes in for two or three hours a day and the money from that is now in the head lessee’s pocket.

“There has been too much of this profiteering at the expense of residents in these blocks.”

“Transparency is perhaps the biggest problem for everyone. People do not know what they are being charged for and whether or not it is legitimately required.”

She paid tribute to the work of Sir Peter Bottomley in the sector.

“There have been too many occasions—cases on the record—where people have found that they are making payments for things such as service charges but half of that money goes into the pocket of the head lessee or freeholder, who has made a deal with or even owned the builders or insurance company used.

“It is all quite wrong that that sort of thing should be happening and that leaseholders do not get honest answers when they ask about it.”

Baroness Gardner expressed her enthusiasm for commonhold as an alternative form of tenure, and lamented the state of the property tribunals.

“Something has gone very wrong with leasehold valuation tribunals since the basic £500 maximum that you were asked to pay has been changed to a £500 minimum to bring your case at all, and with possibly very heavy costs after that.

“We also have the practice, which I have mentioned in the House before, whereby, win or lose, the head lessee or freeholder charges his costs in the tribunal back to the leaseholders. That was never the intention.

“The intention was that a leaseholder would not normally have to meet any costs and this would be a basis on which everyone could present their own cases. There is now a new tribunal system, as from last October, and I think we will be hearing a lot of dissatisfaction about this very shortly.” 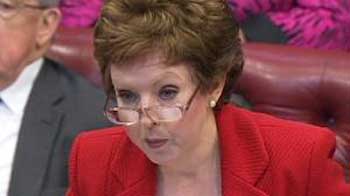 Responding for the government, Baroness Stowell of Beeston (right) made an issue of the amount of leasehold properties in England and Wales.

“… Lady Gardner estimated that there were about 5 million leasehold properties in England. The Government estimate 3 million, but that certainly makes up a significant proportion of the housing market.”

She added that she was an owner-occupier of a leasehold flat and understood “that it can be a complex and technical legal system”.

“But not everyone who owns a leasehold property experiences a lot of problems. What is important is that we strike the right balance in a way that recognises and protects the rights and interests of both leaseholders and freeholders and that we make sure that these rights are kept up to date with changing realities without making things more complicated, burdensome or expensive.”

Baroness Stowell said that she would be asking developers why commonhold is not pursuing commonhold as an option.

“The key point that I want to make in conclusion is that, while we do not have plans to reform the legislation in this area, my honourable friend the Housing Minister is very interested in the concerns that are being raised.”

Lord Best, the former chairman of the Hanover housing association, will be chairing an all-party meeting on leasehold issues.

Full debate can be read here

Parliament told the Property Tribunal ‘stinks’: it lets down leaseholders again and again