Tonight’s Dispatches programme on retirement leasehold was a brilliant example of television journalism that was extremely damaging to both McCarthy and Stone, and to Peverel.

It is excellent that Peverel’s disgraceful treatment of the pensioners at Strand Court, Rye, has been given a wider airing. Read original story here or search Strand Court on this site. 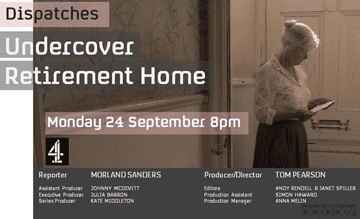 But most powerful of all was the expose of McCarthy and Stone, whose seemingly motherly sales force (“mother value” is the dubious term McC&S uses) were revealed to be predatory.

Any potential new buyers would have been appalled at the way the sales team coaxes new clients into a disadvantageous part-exchange sales process of their existing home.

Marion Bowley, in Weston super Mare, was offered £140,000 for her pleasant family house. But she sold it herself for £50,000 more after only two weeks on the market.

Then the Dispatches sent in an actress posing as the 79-yeat-old widow Mrs Grimsdale, who was pretending to sell a four-bedroom terraced house in Worthing to buy a one-bedroom flat at Cherrett Court, Bournemouth.

She was told by a sales woman that part exchange was a ”god-send”, and assured that she would not get less than the market value. McCarthy and Stone use a third party to buy your house and then – seemingly generously – top the figure up, and discount the flat you are buying by a small amount.

As Baroness Gardner said, you needed to be a “mathematician” to understand it. “they are doing their very best to get the flats off their books as quickly as possible,” said solicitor Rachel Stafford.

The programme did not make the additional point that retirement properties are among the worst performing residential asset in the entire property market. LKP’s advice is: do not buy retirement leasehold at all. These are shark infested waters and best avoided. If you have to live in one, then rent instead. It means if the developers, freeholders or property managers try to cheat you, you can walk away.

McCarthy and Stone said: “Part exchange is only one of a number of options that we make available to our customers to facilitate their move. We take care to explain each option so customers can make an informal decision on what is right for them.”

McCarthy and Stone has profited the most from the retirement leasehold racket and yet has curiously not been the focal point of most of the opprobrium. This is in spite of the hard sell, the dismal capital values and they fact that McCarthy and Stone draws up its disadvantageous and exploitative leases.

Peverel is more widely disliked, and it is excellent that the issues surrounding Strand Court, in Rye, were given a wider airing. Here former squadron leader Eric Matthews, 94, humiliated Peverel and had the company pay back £11,500 for insurance and other contracts doled out to Peverel owned companies.

Peverel said in a statement that it “accepted the LVT decision”, which is very gracious of it.

Norman Greed, 82, showed that pensioners can organise a successful right to manage and slash the burden of their service charges. All retirement leasehold blocks should do the same.