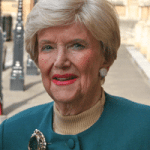 The House of Lords is to debate residential service charges next month.

The move comes from Baroness Gardner (above) following meetings with Melissa Briggs and Sebastian O’Kelly, of the LKP, in February.

Baroness Gardner, a former Westminster councillor who as an Australian comes from a country where English leasehold law was uprooted, has raised the issue of leasehold abuses several times in the past.

She is particularly interested in examples of money being pocketed by freeholders or managing agents – such as insurance and energy commissions (see below) –  without leaseholders’ knowledge.

Baroness Gardner will be raising to wider public awareness the staggering LVT rulings at prime riverside developments in London in recent months.

The £1 million payment residents at St Georges Wharf, Vauxhall, and the devastating LVT ruling against Estates and Management at Charter Quay, Kingston, is likely to form part of of her evidence.

The debate is scheduled for April 23.