The reform-minded leadership of Association of Residential Managing Agents today made a strong call for backing of ARMA-Q, its scheme to add ethically enhanced backbone to the professional body representing block managing agents.

An audience of around 300 members at Queen Elizabeth Conference Hall in Westminster was told that that ARMA-Q was a necessary first step to “inevitable” statutory regulation.

The Leasehold Knowledge Partnership was twice referred to in the opening addresses by association CEO Michelle Banks (above), who discretely did not name her organisation’s “fierce critic”, and by the ARMA-Q regulator, former Labour housing minister Keith Hill, who was not so reticent.

“Even LKP is supporting ARMA-Q,” Hill (below) announced, and quoted LKP’s view that his appointment was “a very good choice”.

Sir Peter Bottomley, the Conservative MP for Worthing West, who is driving leasehold issues up the political agenda, was in the audience.

Michelle Banks strongly urged the necessity of ARMA-Q, which after a protracted and complex lead-in period will become an obligatory condition of membership.

All the association’s members should have signed up by January 2015, although there will be a further year’s period of grace for those companies that have genuine grounds for not meeting the criteria. (Examples given are that not all properties have a valid management agreement or “there may be a need to alter business processes significantly”. LKP will explore this point at a later date.)

And for the first time association members were told what membership of ARMA-Q is going to cost: starting at £150 for firms managing fewer than 500 units to £10,000 for those with more than 100,000 units.

“Its aim is to protect consumers and deliver a recognised advantage to our members, through professional self-regulation that guarantees probity, the highest levels of ethics and best practice in all dealings between residential managing agents, intermediaries, landlords and leaseholders.”

ARMA-Q is a weighty, considered piece of work rather than PR window-dressing, but the open question is how its esteemable aims are going to be received by the existing membership. 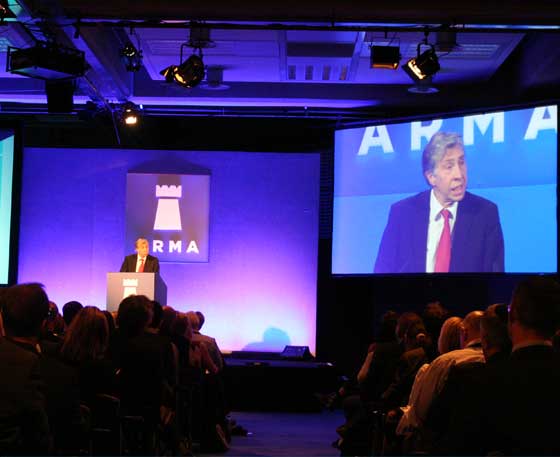 Whatever doubts there may be were expressed at the private AGM the day before, but the costs of the scheme could be a real hurdle. And can some ARMA members meet the criteria of ARMA-Q and survive?

One is not thinking only of some of the association’s insalubrious smaller outfits that have joined during  recent recruiting drives (membership is just above 300).

There are large corporates whose established modus operandi will not stand up to scrutiny if ARMA-Q is serious.

The proponents of ARMA-Q are gambling that these companies will have to up their game, or walk out into oblivion.

And behind all this is the assumption that ARMA-Q leads on to statutory regulation.

Is there wriggle room for moral compromise and fudging?

Almost certainly, people being people. But in response to LKP’s challenge of whether ARMA-Q has teeth, Michelle Banks and Keith Hill could not have been more bullish.

What does LKP think of ARMA reforms, we were asked. As the annual conference begins in London today, here we go …
Next Post: Just how much can a freeholder charge in a leasehold flat sale?