Donate
You are here: Home / News / ARMA / What does LKP think of ARMA reforms, we were asked. As the annual conference begins in London today, here we go … 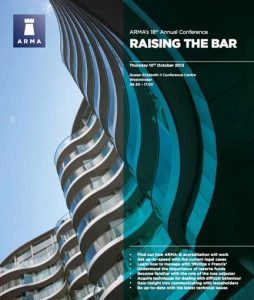 The leasehold management establishment meets today for the annual conference of ARMA in London.

It will be an occasion to trumpet the ARMA-Q initiative – which is the organisation’s attempt to put ethical backbone into the trade body.

The Leasehold Knowledge Partnership was asked by ARMA for its opinion of the organisation’s reforms before the conference and here they are:

Although the Leasehold Knowledge Partnership has been critical of ARMA, it has welcomed the reforms of this organisation. It applauds ARMA-Q, and the appointment of Rt Hon Keith Hill as the regulator.

ARMA-Q is a good step to sorting out the problems of ARMA, which was too quiescent for too long in the face of abuses by its members.

It is not a cure-all for leasehold, nor does ARMA appear to believe it is. Both LKP and ARMA are united in wanting the sector regulated to safeguard the vast sums held by managing agents on behalf of leaseholders – which dwarf those of short-term tenants, who are better protected.

LKP does not regard itself in competition with ARMA, as LKP members are only those managing agents who seek leaseholders as clients rather than freeholders.

Indeed, owning and managing your own freeholds is a bar to membership of LKP, although widespread in ARMA.

LKP does perceive a conflict in ARMA between reformers and conservatives, and supports the efforts of the former.

LKP seeks to discourage the enthusiasm of government officials to regard the sector’s professional organisations as representative of leaseholder opinion.

LKP dismisses the fiction that the bad apples in leasehold are outside any professional organisation.

Indeed, our reports and the court cases demonstrate that there are plenty of repeat offenders within both ARMA and RICS. Sadly, leasehold offers temptations that some find hard to resist.

Is ARMA membership a reassurance among leaseholders? Not as yet, but for those who don’t bear a grudge owing to its past complacency, it has the potential to be. We wait to see whether the reforms have teeth.

Pickles to stop councils charging leasehold owners more than £10,000 for major block repairs. But will it help many?
Next Post: ARMA-Q reformers get strong backing at annual conference