Donate
You are here: Home / News / Stuff a leaseholder and win an iPad! The unpromising debut of ARMA-Q 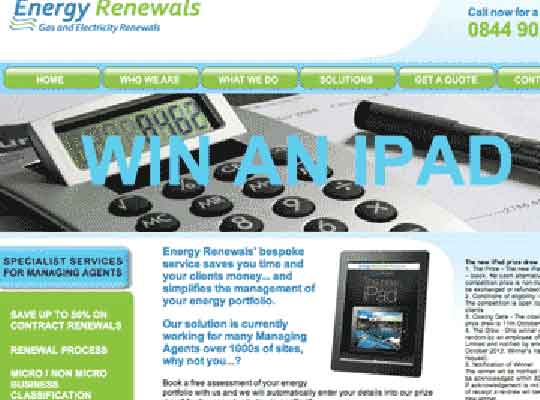 Tomorrow, May 15, ARMA-Q gets a formal unveiling at the House of Lords and the corporates of the property management world will herald this as a new dawn.

In fact, ARMA-Q was unveiled at the organisation’s annual conference last September, and that signified less bright “new dawn” than “same old racket”.

One of the sponsors was Energy Renewals. It offered attendees the chance to win a free iPad if they sign up for an appointment: that is, to provide a sales lead to sign over their apartment blocks for new gas and electricity supplies.

And – as with insurance policies – the brilliant thing is that the leaseholders don’t have to be told anything about these payments and can be relied upon to keep paying up in blissful ignorance!

And this was at an ARMA annual conference entitled “Success in a Consumer Focused Future”!

Our original report on this can be read here

An anonymous ARMA member wrote to LKP: “How can ‘ARMA members lead the market through better regulation and how leaseholders will benefit from a revised set of professional standards’, if ARMA members go with the ‘bungs ‘r’ us’ boys?

“It smacks of hypocrisy and sends mixed messages to everyone attending the conference, or associated with ARMA. It shines a bad light on those of us who backed ARMA from day one, sound in the belief that not only would they ‘provide absolute assurance that choosing an ARMA member will mean reliable, professional and cutting edge service’, but that they would also bring our profession into the 21st century and establish a credible organisation that symbolises transparency and best business practice.”

It is worth recalling that ARMA has never, in its 21-year history, publicly expelled a single member.

Feuding Chelsea leasehold owners find a court-appointed managing agent makes all decisions
Next Post: Is Peverel gearing up for another sale? »