Donate
You are here: Home / News / ARMA / ARMA-Q: a qualified welcome, but it is not a new dawn 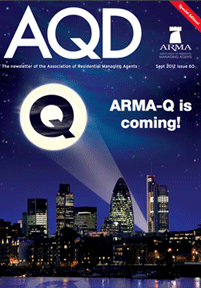 It has also made suggestions to improve it: first, to make the disciplinary procedures public, like ours; secondly, to strengthen the requirement to declare ‘conflicts of interest’ to leaseholders.

It cannot be disputed that managing agents should tell leaseholders that their company is owned by the freehold-owning landlord. Or, that a managing agent is employed predominantly by one freeholder. These would be bars to LKP accreditation but, unfortunately, they exist with some of the ARMA membership.

It is also worth emphasising that many property managers have no intention of joining ARMA, which they believe has been collusive in the abuses of leasehold. The most spectacular examples in monetary terms of over-charging have been the handiwork of ARMA members. Nottingham-based Walton and Allen, an LKP member, “resigned from ARMA membership in 2011 as it became evident that its council is controlled by those very managing agents whom leaseholders want removing from their buildings”.

Omertà, the Sicilian vow of silence, has been a part of ARMA’s unwritten code for far too long.

One might have thought a trade body concerned with ethical standards would have commented after a series of LVT cases involving hundreds of thousands of pounds – at St George’s Wharf, Vauxhall, £1 million – being paid back to residents after systematic, industrial-scale over-charging. Or when a managing agent went off to prison in July for stealing £122,000 of leaseholders’ money. Instead, ARMA says nothing at all. It addresses itself to its membership. Privately. So why should leaseholders believe ARMA-Q is for their benefit?

Inevitably, the more commercially predatory ARMA members will trumpet the ethical scheme and pronounce it a new dawn, with all the issues of leasehold now resolved.

This would be nonsense. It is a positive step by a trade body whose customers are freehold-owning landlords, not leaseholders – and one that has stressed since 2010 that statutory regulation is required. This is the closest ARMA comes to acknowledging that abuses within the leasehold sector are endemic.

But if statutory regulation is required, as ARMA is arguing, then its fanfare for ARMA-Q can only be for something that is second-best.

Many leaseholders may be unpersuaded by a regulator on the ARMA payroll, although the appointment is likely to be from outside the sector and of proven calibre. For all its nose-in-trough feebleness of the past, there is a serious commitment within ARMA to make ARMA-Q effective, and the more thoughtful members know it is necessary.

The major hurdle is whether the regulator’s rulings are to be private, as the old guard would prefer, or publicly available. This is a sector that hides its dirty washing in mediation schemes, ombudsmen and other secret redress arrangements, while at the same time spouting pious drivel about “transparency”.

The complicit deal involved in this process is that the management company or landlord knows that you know it has been cheating you, but it will stop if you keep quiet about it. Secret mediation and ombudsmen benefit only one complainant.

Leasehold Valuation Tribunals are not without their flaws, but they are the only language some landlords and their managing agents understand.

However, it is possible that the ARMA-Q regulator will make public its disciplinary rulings. If so, that will have been an achievement worthy of respect by the ARMA reformers.

But stop this ‘Bungs ‘r’ us’ nonsense

It is obviously depressing that the ARMA annual conference on October 11 where ARMA-Q is being unveiled is being sponsored by an outfit called Energy Renewals. It is offering incentive payments to managing agents to switch energy providers – in other words, it is offering them bungs to spend leaseholders’ money and leaseholders almost certainly will not benefit at all. We reported this here in June

As one ARMA member said: “It is this sort of thing that so undermines trust in the organization, and it ought to be stopped.”

The full ARMA announcement of the draft ARMA-Q is below in pdf:

ARMA-Q solves ARMA’s problems, not those of leasehold