Donate
You are here: Home / News / ARMA / ARMA-Q solves ARMA’s problems, not those of leasehold 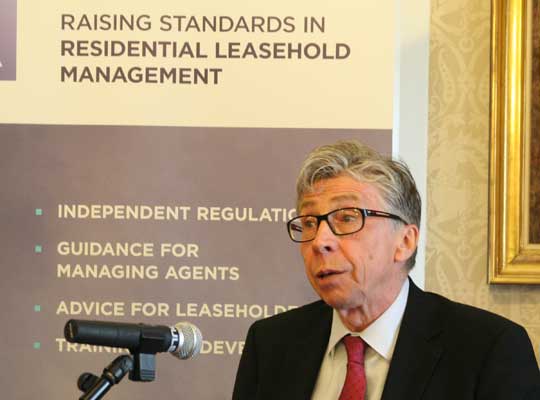 ARMA-Q, the scheme to give ethical credibility to the Association of Residential Managing Agents, was given the blessing of the government and the leasehold establishment yesterday with a House of Lords launch.

Already the new ARMA-Q regulator Keith Hill (above), a former New Labour housing minister, has six cases of complaint to deal with “which I am going to get started on right away”.

Baroness Hanham, Under-Secretary of State, Department for Communities and Local Government, gave a cordial endorsement, saying that self-regulation was the government’s favoured solution to leasehold.

Leasehold tenure is going to increase and she was aware that, owing to different demographics and culture, there could be one or two problems with it (which is an odd way of seeing £1 million law cases, or pensioners facing a £30,000 legal bill because their “right to manage” has been thwarted).

She sang her boss’s praises for his amendment to the Enterprise and Regulatory Reform Bill that means managing agents will have to be members of an Ombudsman scheme.

This irrelevance was dreamed up to dump a crafty clause introduced by Baroness Gardner in the Lords, which would have paved the way to state regulation of managing agents – which has the unanimous support from all sides in the sector.

That is not to say that Mark Prisk, the housing minister, is deaf to leasehold issues – unlike his hapless predecessor – and another round-table of leaseholder insiders (with LKP in the naughty corner as an “observer”) will take place.

While it is difficult to be too enthusiastic about a trade body with such grisly members – who give repeated demonstrations of their priorities in one LVT case after another – ARMA-Q is a very good thing and must be welcomed.

The more thoughtful ARMA members know that it is long overdue, and the wily ARMA secretariat have half an eye on ARMA-Q being the statutory regulatory scheme in leasehold management (helped along by the two leasehold civil servants at the DCLG, who were present at the celebrations yesterday).

The appointment of Keith Hill as the regulator is also a very good choice.

Unfortunately, he overdid matters in his address saying “ARMA represents only half the country’s managing agents and these are the good guys.”

ARMA certainly does have a lot of “good guys”. But it also has some real stinkers and they have been calling the shots in this organization until very recently.

The problems with leasehold, as we repeatedly point out in our lobbying, are not confined to one or two Rachmans: it is large-scale, corporate cheating surrounding inter-company deals, loaded charges, insurance commissions and, as often as not, joint ownership of managing agent and freeholder – which is a bar to membership of LKP.

Many very good managing agents abhor ARMA and won’t have anything to do with it; some have resigned from the organisation. For years it colluded in covering up the abuses of leasehold while intoning hypocritical drivel about “transparency” and fairness towards stakeholders.

There is also the point that many managing agents are members RICS, or as “associates” are members of RICS lite, and have no need to join ARMA at all.

Hill certainly demonstrates a commendable zeal for his new role, which will involve 2-3 days a month. Although details are sketchy, his decisions will be made public: he says immediately after the case. Although there will also be an annual report.

For leaseholders, ARMA-Q is a useful additional source of redress, if it can be demonstrated that an ARMA member has failed to comply with the organisation’s ethical standards.

Many might be tempted to look to the regulator for low-cost, simplified justice, without the procedural complications and risk of costs involved in an LVT.

That would be to misunderstand ARMA-Q: it is there to sort ARMA’s problems, not those of leaseholders. It will not be Keith Hill ruling on whether you are paying too much in the service charges.

ARMA-Q gets a pat on the back from government and is going to be trumpeted by the vested interests in leasehold.

Leaseholders with serious disputes will know, from even a cursory read of this website, that there is no alternative to meticulously prepared litigation in the LVTs.