Donate
You are here: Home / News / Baroness Gardner urges government to back commonhold 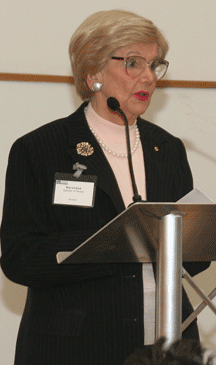 Last Monday in the House of Lords, Baroness Gardner of Parkes (left) urged the government to back residential commonhold as a substitute for leasehold.

Specifically she asked whether commonhold could be included in the £10 billion government debt guarantee to stimulate infrastructure investment.

But Lord Newby, a Liberal Democrat peer in the Treasury, replied that: “As commonholds typically consist of privately owned properties and given that, in any event, commonholds are relatively rare, it is unlikely that any commonhold scheme will come forward under the guarantees programme.”

Commonhold – which is the system of tenure that exists everywhere in the world outside England and Wales – did not take off after its introduction in the Commonhold and Leasehold Reform Act in 2002.

Mainly this was because during the property frenzy of those years no buyer paid the slightest attention to the type of tenure he was buying. Property ‘investment’ was a one way bet and everyone just piled in.

Developers don’t like commonhold because with leasehold they enjoy two bites of the cherry: selling the leasehold flat to a homeowner and then selling off the freehold to whoever will pay the most for it.

The upmarket Berkeley Group has realized how short-sighted this was and how damaging it could be to its reputation.

It has paid £1 million to settle a dispute at St George’s Wharf, Vauxhall; several hundred thousand at Chelsea Bridge Wharf and another sum at Imperial Wharf in Chelsea.

The full Lords debate can be read here