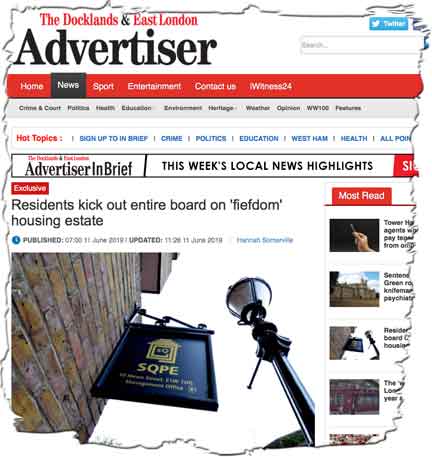 Enfranchised leaseholders at the South Quay Estate in Wapping, an exclusive neighbourhood, have ousted their entire board in protest at spiralling service charges.

Annual service charges are £4,000, which local MP, Jim Fitzpatrick – patron of LKP and chair of the All Party Parliamentary Group on leasehold reform challenged with the board last year. He received no reply.

Matters came to a head on May 22 at a leaseholder and shareholders meeting when the entire board of directors was shown the door. A new board is set to be elected on June 24.

The Docklands and East London Advertiser reported the dispute relating to the management of 299 flats across seven sites surrounding St Katherine Docks. A legacy of the Greater London Authority, the 1970s development houses some social tenants and leaseholders, with the majority of the properties now owned privately.

Residents kick out entire board on ‘fiefdom’ housing estate

Archant A housing estate in Wapping is in limbo after its entire board of directors was unseated at a fiery emergency meeting. Burr Close in St Katherine Docks. Picture: Polly Hancock South Quay Plaza Estates (Freehold) Limited took over the South Quay estate at St Katherine Docks from Tower Hamlets Council in 2007.

Leaseholders complained about opaque service charges and the high one-off major works at the site, which is managed for the board by managing agent Rendall and Rittner.

The chair Tony Winterbottom, a former senior executive at the now-defunct London Development Agency, had been in post as chairman of South Quay Plaza Estates (Freehold) Limited since 2009.

His bumper pay off from the LDA was sufficiently gargantuan to merit press attention:

Tens of millions of pounds of public money were squandered by Ken Livingstone’s development agency, a report says today. The investigation into the London Development Agency, ordered by Boris Johnson, outlines a string of failings including “ineptitude” and “massive misspending”.

The Advertiser reports that he went on to be the highest-paid special advisor to Lutfur Rahman, the Tower Hamlets politician removed by the courts from the executive mayoralty in 2015.

It has been alleged that the board operated in a secretive manner. Leaseholders were asked to sign non-disclosure agreements when they sought to work on the sub-committees, it is claimed.

These “gagging clauses” would have prevented concerned leaseholders from sharing concerns with neighbours. 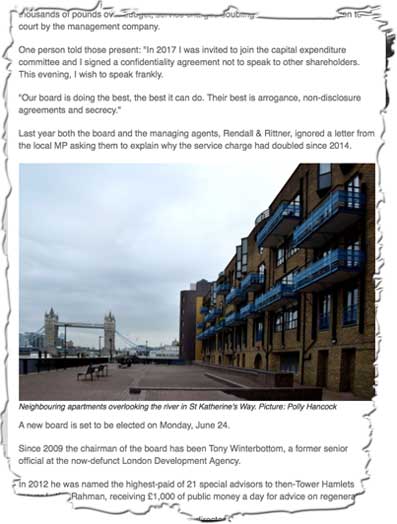 Mr Winterbottom and the other former directors deny accusations from leaseholders:

“The probity of the former board was questioned. The facts are what matters. All statutory requirements have been met including a proper financial authority framework.”

One resident, Marian Lewinski, told the Advertiser that:

“We need to stop the unnecessary legal actions. It feels like they are the lords of the manor, and we are serfs.”

While South Quay has obviously not been a harmonious leaseholder controlled site, at least the shareholders / leaseholders have managed to dump a regime in which they had lost confidence.

Not an option, sadly, in many prime London sites which remain in the thraldom of a third-party freeholder, or “responsible long term custodian” as the sector prefers to describe these wholly unnecessary entities.

Will CMA investigation at last give cheated leaseholders the chance to sue plc house builders?
Next Post: Estate agents say extortionate charges are blighting the lives of 10% of leaseholders