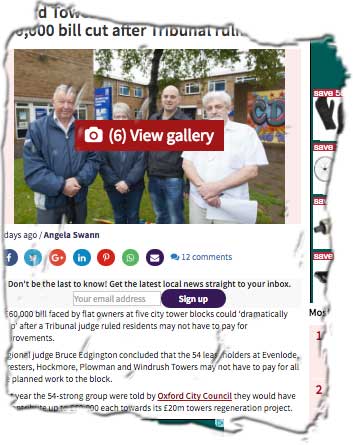 Oxford City Council leaseholders facing nightmare £60,000 each for major works have won their first round in the tribunal.

Tribunal judge Bruce Edgington concluded that the 54 leaseholders at Evenlode, Foresters, Hockmore, Plowman and Windrush Towers may not have to pay for all the planned work to the block, the Oxford Mail reports

Last year the 54-strong group were told by Oxford City Council they would have to contribute up to £60,000 each towards its £20m towers regeneration project

An initial tribunal hearing has said residents may not be left footing the bill for certain elements of the project – although it is not known yet what the final cost will be.

A subsequent hearing in September (12-14) will decide whether or not flat owners should be charged for work to the ventilation system, fire prevention measures and security system upgrades.

Blackbird Leys parish councillor John Dillon, speaking as a resident, said: “People know they are liable for repairs to the flats but they shouldn’t have to fund a council spruce up of the entire block.

“It’s a positive ruling but I hope there’s going to be a dramatic drop in the cost per person and not just knocking off £3,000 or something.”

The city council applied for a determination on whether charges were fair and were not requested to do so.

Judge Edgington said it came down to whether leaseholder were being charged for repairs – which is fair – or improvements.

Following the ruling the council acknowledged that it ‘may or may not’ be able to charge leaseholders for certain element of the work.

But its board member for housing Mike Rowley said it was a major step forward.

He said: “The main goal of this hearing was about getting definitive legal certainty about what works can be reasonably charged for, and this Tribunal ruling is a big step forward in that regard.