Donate
You are here: Home / Latest News / Uproar in Oxford as 50 council leaseholders face bills of £50,000 each 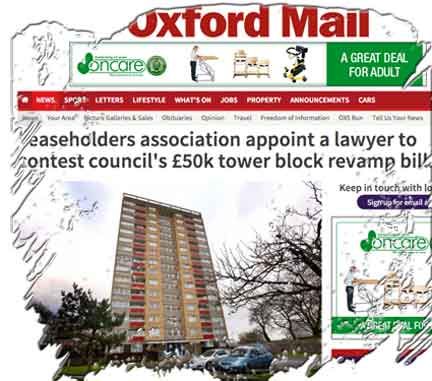 On January 4 2016, approximately fifty Oxford leaseholders were each presented by Oxford City Council a one-off service charge bill of around £50,000.

The council claims it is reasonable and fair for leaseholders to pay for a major £20 million regeneration project for the five high-rise towers located on the outskirts of Oxford.

Shell-shocked Oxford leaseholders responded by forming the new Oxford Towerblock Leaseholder Association to fight the council on the proposed costs.

The issue has been reported in the Oxford Mail here

The scheme, which launched eight years ago initially as a simple refurbishment project costing £4.7 million, has mushroomed into a £20 million major building works programme. The leaseholders claim that since a refused freedom of information request in 2008, Oxford City council has consistently refused to disclose proposed costs to leaseholders.

Rather than on-going reasonable repairs and maintenance, for which leaseholders are duly accountable to offer contributions, a wide variety of building improvements have been penned.

The leaseholder’s association chairman, Dr Stefan Piechnik comments: “While our leases do not state we should pay for improvements, Oxford City Council is justifying its actions by using the misleading term ‘refurbishments’.

“As a one-to-six minority, Oxford leaseholders had no impact on the choice of measures and any queries on costs were never addressed. This is wholly unexpected after eight years of continued unanswered enquiries.”

Anticipating objections from leaseholders, Oxford City Council has offered the opportunity of a First Tier Tribunal to defend its position on the legality of the project’s scope, scale and related charges.

On top of their day jobs, the leasehold members have prepared 40 pages of formal observations to be submitted to the council on the proposed January bills.

Furthermore, pooling leaseholder contributions, the leaseholders have appointed barrister Matthew Fraser of Landmark Chambers to help fight the case, which the association hopes will be settled ahead of a tribunal.

Current member numbers of the leaseholder association are 29 out of 51 affected leaseholders. 25 of them live in the blocks.

The group’s secretary Jackie Stocker states: “No-one understands the project. Our block definitely requires a leaking roof to be fixed as this has been leaking for a long time.

“These leaks have caused the lift to fail on multiple occasions, which the Oxford City Council now wants to replace with new lifts. Common sense dictates however, repair the roof and solve the problem with the lift.

“It is absurd to start such a big project and replace everything at a whim without costs considerations. Not least that the council has both failed to establish any sinking funds for the blocks after years of annual service charges and failed to warn the residents in good time about the scale of charges.”

Oxford City Council hopes to recoup around 10% of the £20M works bill from leaseholders, many of whom are low-income ‘right to buy’ council tenants.

If any leaseholders aren’t able to afford their bill however, the council has stated it could claim an ‘equity share’ in the leaseholder’s property to the value, on which it would also implement interest at current market rate.

This in effect would have a devastating effect on many and would likely even bankrupt some ‘right to buy’ leaseholders, who could lose equity in their homes and freedom to manage their own property.

The leaseholders also recognise the psychological human impact of losing control over one’s home is enormous. A past example of a 93 year old lady who “died of shame” under similar circumstances in Newham, when faced with a £50K service charge bill, prompted a national cap on leaseholder repair charges called Florries’s law.

From August 2014 councils and housing associations must limit the amount they can charge leaseholders to £10,000 in any five year period, for future major repair, maintenance or improvement works, when wholly or partly funded by the central government.

The Oxford leaseholders members claim Oxford city officials made no effort to apply any such caps and ask how the council could have raised £20 million without any public cash involvement.

Should the leaseholders succeed in reducing costs, members view the case having an impact beyond the five Oxford towers.

Dr Piechnik adds: “This example of extrapolation could easily be a test-case for leaseholders and a national political issue.”