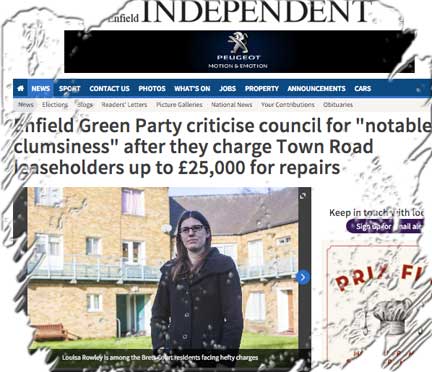 Leaseholders in Town Road, in Edmonton, Enfield, north London, are the latest in local authority leasehold properties to be hit by major works bills.

The works are being carried out at Town Road, Edmonton.

Local Green Party councillor David Flint accused the council of “notable clumsiness”, and asked why no contingency fund had been built up.

More on the story can be read here.

Yesterday LKP reported 50 leaseholders in Oxford facing bills of £50,000 each.

Eric Pickles, the former Communities Secretary in the Coalition Government, attempted to limit leaseholder liability to £15,000 for major works schemes in London, and £10,000 outside the capital.

But this only applies if central government funding is involved, and councils routinely work around this.

More serious, councils with their slack approach to cost control sign up to long-term maintenance contracts with building companies at hugely disadvantageous terms.

This means that individual major works schemes do not go out to tender.

At times, these long-term contracts have been the result of corruption, as LKP reported here

LKP property management start-up grows from 120 to 850 flats in nine months
Next Post: If you want to reform leasehold, this is how you could do it