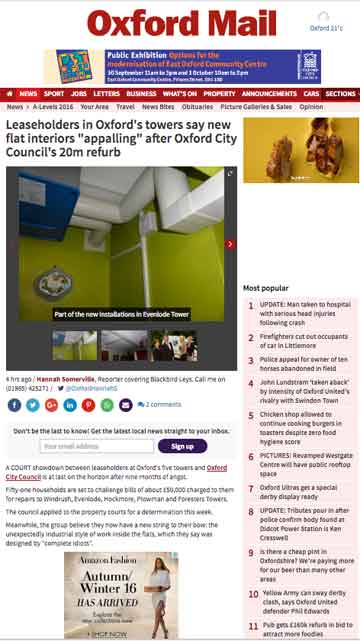 The epic local authority leasehold dispute involving 51 leaseholders of Oxford City Council each owing £50,000 is heading for the courts.

Late evidence may be the quality of work to date, with new interiors described as the work of “complete idiots” by leaseholders.

He said: “The sprinkler and extraction system look really industrial and no attention has been paid to the aesthetics.”

Councillor Mike Rowley, the board member for housing, said: “We want to reassure leaseholders that we do not intend to take enforcement action in respect of any unpaid bills until the First Tier Tribunal has ruled on the matter.”

Er … that might be because you cannot take enforcement action until there is a ruling (which is the point of judicial procedure).

Land Registry sell-off is shelved (for the moment)
Next Post: The Times: ‘Exit fees and poor resale values: the uncomfortable truth about retirement homes’