Donate
You are here: Home / News / Oxford Council leaseholders have repair bills slashed from £50,000 to under £4,000 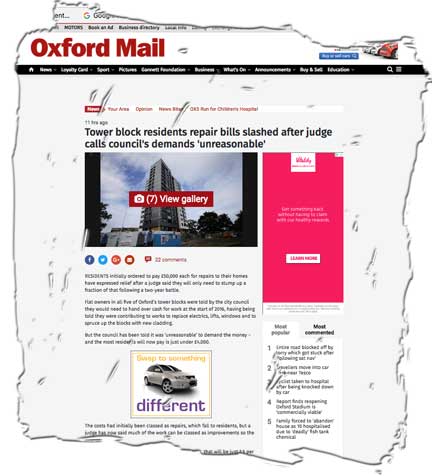 Oxford Council leaseholders who were each facing bills of £50,000 each have seen the bills slashed today – to just under £4,000.

A judge ruled today that the eye-watering bills were “unreasonable”.

A group of 54 leaseholders set up the Oxford Tower Block Leaseholder Association (OTLA) to fight the action.

The dispute began in 2016 and in the early days the association was racked with volatility and the occasional fall-out.

It is to the huge credit of the leaseholders that they managed to hold things together and see this court dispute through.

RESIDENTS initially ordered to pay £50,000 each for repairs to their homes have expressed relief after a judge said they will only need to stump up a fraction of that following a two-year battle.

OTLA is headed by Darren Hazell, a buy-to-let investor owner of a flat, who today told the Oxford Mail:

“We are pleased with the outcome but it’s been two years of my life and others’ lives wondering where they’re going to get £50,000.

“I think the whole thing was completely wrong. I think it’s despicable to scare the life out of people who haven’t got that money.”

Mr Hazell owns a flat in Windrush Tower in Blackbird Leys. he added:

“I am a businessman and I have been in business for a long time. It didn’t really scare me much. For the old ladies who got a £50,000 bill – that is not right.”

He said three people had been so worried by the prospect of getting the money that they moved out of their home.

The city council confirmed it had bought back three flats in 2017 but was unable to say what the reason for the residents’ departures was.

In addition, one leaseholder paid the full amount demanded and is to be reimbursed.

The open question is what the decision means for other leaseholders in local authority owned blocks.

The advice is 1/ to fight the procedure of the section 20, in case there are errors – for example, the council told conveyancing solicitors that no major works were planned; or 2/ to question the amount of money demanded on grounds of reasonableness.

Both courses will require lawyers and surveyors so leaseholders – as ever – need to organise and unite to confront these issues.

Farieda Chandoo, once George Osborne’s nanny, is currently paying off a £110,000 debt after disastrously taking on Southwark council and withholding funds.

From the Oxford Mail:

In October, regional judge Bruce Edgington told the council: “With long leases, the landlord has to be reasonable and some might say that undertaking a huge amount of work to a property all at the same time – when such works could and should be planned over a period of time – and then demanding nearly £50,000 from each leaseholder, could be said to be unreasonable in itself.

“Very few people would have instant availability to such resources, although it is the fact that financial arrangements have been put in hand to help long leaseholders pay over a longer period. However, that will not stop them worrying about such a large debt.”

Stephen Clarke, the council’s head of housing and property services, said: “The Tribunal’s determination and subsequent agreements between the Council and OTLA have provided much needed certainty to leaseholders on how much they can expect to pay as their contribution to the repairs.

“As we had made budget provision for the full costs of the tower block improvement project from our Housing Revenue Account and had not made any budget income assumptions for contributions from leaseholders, there are no significant financial implications from this determination.”