Donate
You are here: Home / Latest News / Land Registry sell-off is shelved (for the moment) 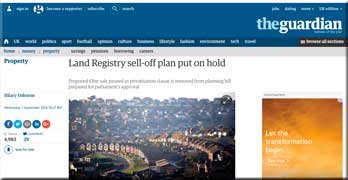 The astonishing proposal to sell off the Land Registry has been removed from government legislation as it ponders responses to the idea.

The £1 billion sale was part of George Osborne’s efforts to balance the books.

The proposal would empower the kind of property operators who have already registered the ownership of £263 billion of property assets in England and Wales in offshore companies since 2000, according to Property Week.

Privatising the Land Registry is akin to selling Inland Revenue.

It was blocked in 2014 by LibDem business secretary Vince Cable during the Coalition Government.

This time the proposed sell off came from his successor Sajid Javid.

Don’t sell off the Land Registry