Donate
You are here: Home / Latest News / Don’t sell off the Land Registry 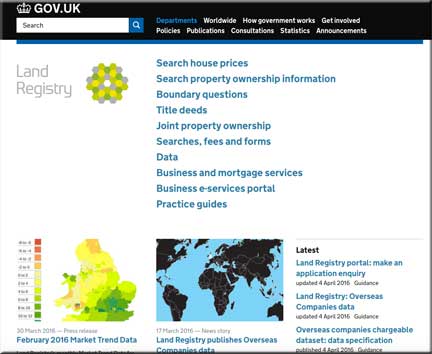 It probably seemed a good idea to Sajid Javid, the business secretary, just before Easter to sneak out an announcement that the Land Registry should be sold off.

The aim is to reduce government debt – the Leasehold Advisory Service, anyone? – which is odd as the Land Registry actually makes money.

Then this week we have had the massive data leak about Mossack Fonseca, and whole murky world of offshore finance has come under the spotlight.

It is an issue of considerable relevance to all leaseholders, but particularly those in retirement leasehold whose freeholder is Vincent Tchenguiz, whose interests are held in a network of companies – in “quasi-biblical complexity”, according to one judge – that are ultimately controlled by his Tchenguiz Family Trust, supposedly based in the British Virgin Islands.

At least in Tchenguiz’s case, owing to his and his brother Robert’s wrongful arrest by the Serious Fraud Office in March 2011, there is some public knowledge of his affairs.

Staggering amounts of residential and commercial property in the UK are owned by offshore entities. It amounts to £263 billion since the year 2000, according to Property Week magazine.

Private Eye, which has been making the running on this story, puts the total at slightly less.

Both publications are analysing the database of the Land Registry. The data shows that after Jersey, with £85 billion of property assets, the British Virgin Islands is the second largest single source of cash with £50 billion.

The money from these sources is secret for a very good reason: it is either the proceeds of crime, or it is being hidden to avoid tax.

It is, however, making utter fools of the rest of us who attempt to make society work.

The ultimate beneficial owner of all property assets in this country ought to be known, and the information publicly available.

It is absurd that home owners in, for example, the Post Box in Birmingham, when fighting for a right to manage application, cannot know who their freeholders are because Post Box Ground Rents Limited is registered in Guernsey.

“A combination of factors mean that we will never know exactly how much criminal money is being laundered through the UK market,” a National Crime Agency spokesman is quoted in Property Week.

“These factors include the hidden nature of the problem, the intermingling of legitimate and illegitimate funds and the lack of transparency in some source countries.”

David Cameron is supposed to be cracking down on the murky offshore world and demanding greater transparency – that exhausted word again – for Britain’s “treasure islands” of offshore tax havens.

But then the documents leaked from Mossack Fonseca reveal that his late father, Ian, used bearer shares –  one of the most secretive tools of the offshore trade – after he helped set up Blairmore Holdings, a fund for investors.

Whenever Ian Cameron wanted to attend a board meeting, he had to fly to either Switzerland or the Bahamas to ensure the investment fund wouldn’t have to pay any UK income tax or corporation tax on its profits.

The prime minister could also draw on the expertise of his brother-in-law William Waldorf Astor, heir the viscountcy, for advice on the value and importance of residential freeholds.

He was a protégé of Vincent Tchenguiz for whom he worked, and through his company Long Harbour has built up a £700 million freehold portfolio. It includes a chunk of his fallen mentor’s assets.

So given the mine of information about dubiously owned property assets in the Land Registry, should it be sold off and who could be trusted to buy it?

Leaseholders would understandably be anxious about issues such as the registration of their lease extensions. There is also the question of vast tracts of unregistered land, which would inevitably encourage temptation.

The monetising possibilities of a privatised Land Registry are too appalling for the suggestion to be considered seriously. Yet Conservative ministers are re-addressing it for a second time. Why is that?

All in all, sensible people will blow a loud raspberry at Sajid Javid’s proposals to flog it off.

Land Registry sell-off is shelved (for the moment)