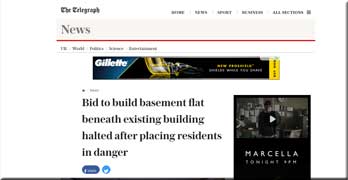 A plan to build a basement flat at the bottom of an expensive central London block features in the Daily Telegraph today.

Forty five residents at Queen Court in Bloomsbury are furious at the proposals to transform the 1,975 square foot space with no natural light, apart from a few skylights, into a basement apartment.

The residents, who have an RTM, have successfully obtained an injunction to stop the work after discovering that they breached safety regulations and may have invalidated the building’s £15 million insurance policy, the Telegraph reports.

The newspaper also revealed that the owners of the basement are John Emore, 56, who runs an office rental company and his wife Florence, 48, a doctor at a London hospital.

However, the basement came with existing planning consent from Camden Council to develop a one-bedroom flat, and this had been granted in spite of previous objections.

The case indicates the feverish state of the London property market. 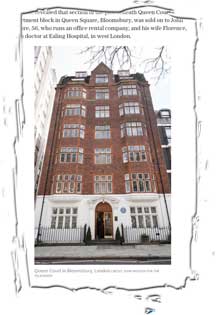 Michael Corker, of the RTM, is quoted: “Mr Emore has run roughshod over every building regulation there is without paying any attention to the welfare of the people living above the basement. I feel he thinks he’s a bit of a kingpin and won’t let anything stand in his way.”

Curiously, Queen Court was once home to the heroic British secret agent Tommy Yeo-Thomas GC, known as the White Rabbit, who was captured in Nazi occupied France, tortured and subsequently imprisoned along with other British agents at Buchenwald concentration camp.

His widow – although they were never formally married – lived in a small flat near the Sanderson Hotel, north of Oxford Circus, where the founder of this website interviewed her for the Daily Telegraph in 1996.

BBC Radio 4 on housing association leasehold … and a German asks: is it safe to buy a flat in London?
Next Post: Don’t sell off the Land Registry