Donate
You are here: Home / Latest News / BBC Radio 4 on housing association leasehold … and a German asks: is it safe to buy a flat in London? 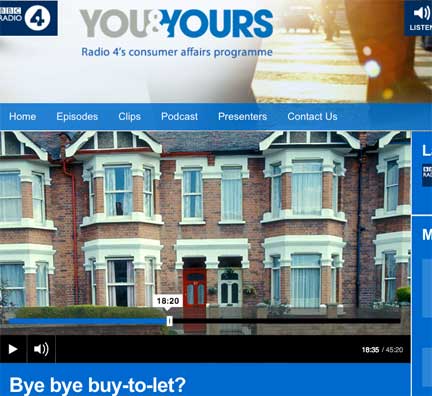 Housing association leasehold featured on the BBC Radio 4 consumer show You and Yours today … and LKP managed to make a case for commonhold as an alternative.

The programme concerned Pam Pearson, a leaseholder whose flat was left cold and damp after a cavity wall outfit had worked on the property.

In a report by Beatrice Pickup, she said was sceptical that the work was even necessary as the site had had cavity wall insulation in the 1980s.

The housing association Your Housing had been approached by insulation installers Warm Front, and accepted works on the building – which is doubtless a taxpayer funded scheme to insulate properties.

But the cavity wall job was not done well, it appears, and he flat became cold and damp.

She spent £300 on consultants to identify the problem, and Your Housing has agreed to reimburse this.

The programme asked LKP whether Pam had been disadvantaged because the works were not paid for and therefore there had been no section 20.

Sebastian O’Kelly, of LKP, replied that while a monetising private freeholder would have had to tender for the work, he may have decided on reflection to appoint himself and take a margin on the works.

The housing association had behaved “quite decently” in his view, compared by the usual standards of private freeholders in this sector.

He said housing associations were anticipating selling 500,000 leasehold flats owing to the government’s decision to sell off flats through extending right to buy.

Is there an alternative to leasehold, asked the presenter Peter White?

“Yes, leasehold is unique to England and Wales whereas versions of commonhold prevail in the rest of the world, including Scotland,” replied Mr O’Kelly. “All seem to be more harmonious that English leasehold law.”

Curiously, LKP was later contacted by a German father whose daughter wanted to buy a flat in Plantation Wharf, in Battersea.

He had seen the appalling story of Dennis Jackson having his £800,000 flat forfeited – which was overturned owing to the efforts of Sir Peter Bottomley and LKP.

“I had a timeshare in Florida and I do not want to get caught up in all that again,” said the gentleman.

We explained that leasehold exists in England because of its political stability. This allowed dukes and earls to hold on to their extremely valuable land in central London and other cities – a fact that astonishes foreigners – and turn the new Victorian middle class into leaseholders.

The thriller writer Wilkie Collins was a most embittered leaseholder on the Portland estate of Wimpole Street.

Continental Europe, with its French-based civil codes (spread by the Revolution and Napoleon), does not have this form of landlord-ism, and rest of the world followed suit.

“It sounds like the wild west,” said the German gentleman. “Would you advise us not to buy?”

LKP urged the German family to pay proper money for a conveyancing solicitor, and question the lawyers closely about the lease terms: how many years, ground rent, its increments … and whether any major works are planned at Plantation Wharf.

“Surely, the problems of leaseholders are among the poorer section of the population?” he asked.

Of course, this is a widespread and incorrect assumption.

While in most of the country, the owners of leasehold flats are usually the poorer home owners, it London they can be the wealthiest property owners of all.

And the affluent are just as capable of messing up leasehold disputes as their less prosperous neighbours.

Plantation Wharf, which is on the river in a prime site, has its own residents’ management company that the residents did not take over for 15 years after it was built.

This was extraordinarily complacent.

The wealthy simply have more means to get out of a jam.

Conversely, with bigger sums involved, you get more formidable predators, as the residents of West India Quay in Docklands have discovered.

The conversation ended with us agreeing that it is extraordinary that in London you can spend £120 million on a flat in One Hyde Park – admittedly of several storeys, and the size of large country house – and still remain a tenant in law.

The oligarchs who live there are just as vulnerable to insanities such as lease forfeiture as someone desperately hanging on in a £35,000 rundown, single bedroom flat.

‘Years’ to sign off Peabody flats as safe, BBC is told. That means no one is able to sell up and leave …