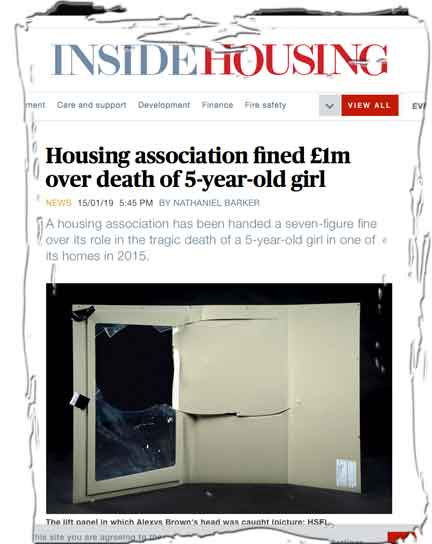 Synergy Housing Limited fined £1m plus £40,000 in legal costs for health and safety failings that led to the death of a five year old girl in a lift accident.

Synergy Housing Limited, a subsidiary of Aster Group, which owns more than 30,000 homes, was pleaded guilty along with lift company Orona Limited at Bournemouth Crown Court today, Inside Housing reports.

Alexys Brown was crushed in the lift in Weymouth in August 2015.

“The court heard how she got into the lift used by her brother, who suffers from a degenerative neurological condition and is wheelchair-bound, to fetch his phone from upstairs in the house.

“She put her head through a hole in a plastic panel on the front of the lift, causing her head to get caught between the ground floor ceiling and the rising lift.

“The panel was damaged in early 2013 and was not fixed or replaced – despite being noted by an Orona engineer following an inspection three months before Alexys’ death.”

Firms fined more than £1.5m after girl dies as a result of faulty lift

Alexys Brown died after becoming stuck between the lift and the ceiling She was cut free by firefighters but died from ‘horrific’ head and neck injuries Housing association Synergy Housing Ltd, owners of her home were fined £1m Orona Ltd whose job was to maintain the lift was fined £533,000 Two companies have been fined more than £1.5 million over the death of a five-year-old girl who died, as her mother speaks of her ‘unimaginable loss’.

The Health and Safety Executive (HSE), which brought forward the prosecution, said after sentencing that Synergy, Aster Property Limited and Orona’s “negligence” had caused “a wholly avoidable tragedy, under horrific circumstances”.

Aster Property – another subsidiary of Aster Group – managed a contract with Orona to maintain the lift on behalf of Synergy Housing.