… Regulation must have ‘sufficient independence and robustness to withstand industry pressures’ 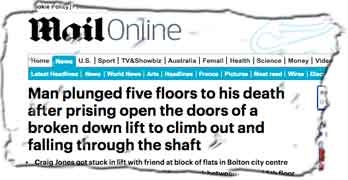 The former ARMA regulator Sally Keeble resigned from her post last month because she claims the trade body scrapped a regulatory case against Warwick Estates over a lift shaft fatality.

Mrs Keeble, a Labour MP for 13 years and former leader of Southwark Council, claimed that “a properly constituted regulatory panel” was scrapped before considering a complaint against Warwick Estates Property Management Limited over the death of plasterer Craig Jones, 27, in a lift shaft accident.

Mr Jones, who was trapped with a friend on a Saturday afternoon, was killed when he attempted to climb out of a broken down lift at Marsden Houses in Bolton in September 2014.

A report of the death can be read in the Daily Mail here:

Craig Jones got stuck in lift with friend at block of flats in Bolton city centre Believed they prised open doors after lift got stuck between 4th and 5th floor Plasterer Mr Jones fell down lift shaft to his death while trying to climb out 27-year-old was taken to Salford Royal Hospital but he died from his injuries A man who tried to climb out of a broken down lift after prising open the doors ended up falling five floors to his death down the lift shaft.

After prosecution in December last year Warwick Estates Property Management Limited was fined £120,000 and ordered to pay costs of £45,000.

The reasons for Sally Keeble’s resignation have prompted a surge in readers’ comments on the LKP website.

In a statement to LKP, Sally Keeble said:

“The comments on the LKP website are a salutary reminder of the need for transparency in matters that affect public well-being.

“The reason for standing down before the end of my contract was because of a decision by ARMA to cancel a properly constituted regulatory panel meeting convened to consider a disciplinary case which involved a fatality.

“ARMA’s system of self-regulation of the residential management industry was an important step that should have provided greater protection for the public and for the many firms which aim to provide good services in a fiercely competitive commercial setting. It filled a vacuum left by the lack of statutory regulation of the sector, and was a brave initiative.

“However, any such system must have sufficient independence and robustness to withstand industry pressures and be able to deal with the most serious cases, including one that tragically involved a fatal accident.”

Speaking after the hearing in December, HSE inspector Sarah Taylor said: “The problems with this lift were well known and if Warwick Estates Property Management Limited had fulfilled their health and safety responsibilities Craig Jones would probably be around to celebrate Christmas with his family this weekend.”

It is understood that the regulatory process of ARMA was in disarray before this case as a result of a separate legal action by an as-yet unidentified member of the trade body which resulted in a substantial legal settlement.

As a result, the role of the regulator was under review.

ARMA has as yet declined to comment on either issue.