Self-regulation has failed at both ARMA and RICS 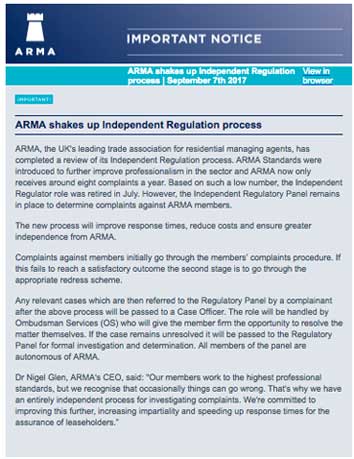 ARMA has responded to Sally Keeble’s statement that she resigned owing to interference in her regulator’s role by declaring that the post was ‘retired’ instead.

Further, ARMA says that the decision arose because ARMA only receives around eight complaints a year.

It is astonishing that ARMA is attempting to put a positive spin on what is now a very public debacle.

The statement did not address Mrs Keeble’s claim that the trade body closed down her disciplinary panel over Warwick Estates, which had already been fined £120,000 and had £45,000 of legal costs awarded against it over a fatality in a lift shaft.

Nor did it make mention of the hole in ARMA’s finances owing to an unknown member taking legal action over a disciplinary matter. The losses are believed to have been considerable, and are referenced in the accounts.

It is a huge failing of self-regulation in property management that ARMA is having to wind down its regulatory regime and farm out professional discipline to the mild property ombudsman service.

Ombudsman rulings are always anonymous and the fines are usually minimal.

Self-regulation has also failed at RICS, where the disciplinary case against Benjamin Mire, of Trust Property Management, resulted in fiasco last year and the case was dropped.

Owing to the efforts in October 2016 of barrister Marc Beaumont more than 200 struck-off chartered surveyors had to be re-admitted to the trade body. Mr Beaumont appears to specialise in challenging flawed professional regulatory regimes.

Both cases show that neither RICS nor ARMA are capable of effective self-regulation. Yet property managements are responsible for millions of pounds of leaseholders’ money.