Donate
You are here: Home / Latest News / The Property Ombudsman fines agent for selling house as ‘virtually freehold’. (Don’t worry ARMA members: it was only £200)

Whose responsibility is it anyway? This case summary looks at a tenure dispute – find out more about the complaint and the Ombudsman’s ruling after the agent claimed long leaseholds amounted to ‘the same thing’ as freehold. The buyer in this case explained that they told the agent that they wanted to purchase a freehold property. 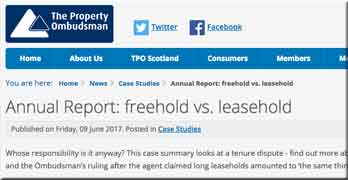 LKP has stopped developers misleading buyers by claiming in marketing materials that long leases are “virtually freehold” – with both McCarthy and Stone and Persimmon ceasing the practice.

It emerges that The Property Ombudsman has also ruled on a case in June, directing the sales agent (which possibly means a developer) return £1,100 in legal and survey fees and an additional award of £200.

LKP urges all readers who encounter this nonsense to raise complaints with both the relevant ombudsman service and the Advertising Standards Authority.

It is deeply misleading to argue that a long lease of say 999 years is “virtually freehold”: a leasehold is a tenancy; a freehold is something else entirely.

Of course, The Property Ombudsman award of £200 is pathetic and the agent / developer involved in this deception is unnamed, so the ruling is toothless.

When ARMA set up its regulatory regime it was always strongly emphasised that the rulings would be published.

LKP supported the trade body for taking this step.

The resignation of Sally Keeble as regulator discontinues that role and she will not be replaced.

Passing all complaints on to the anonymous ombudsmen process effectively means the end of ARMA’s efforts at self-regulation.

That is a realistic decision given that many of the companies that make up its membership are not entirely savoury, and some are out-and-out rotters. (We have repeatedly warned ARMA about some of them.)

Politicians and civil servants need to understand: there is not one large managing agent out there that is large through consumer choice.

All the large managing agents, without exception, have got large by doing the bidding of developers or the larger freehold owners.

Should leaseholders care whether a company is a member of ARMA at all?

It demonstrates some engagement with the well regarded technical information and education for the profession. For a large block of flats, it would be exceptional for a managing agent not to be a member of ARMA.

But as a guarantee of good ethical behaviour it is irrelevant.

If you are looking for a managing agent with a track record of working for leaseholder-controlled sites, then you can start by considering a management company that is accredited to LKP.