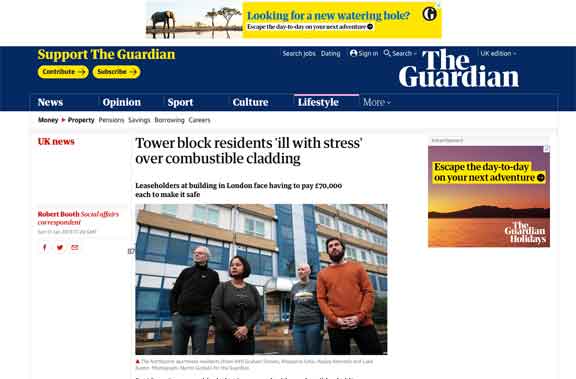 The Tchenguiz group has assured leaseholders that it would not redevelop a site made unviable by Grenfell cladding costs for its own gain.

Leaseholders at Northpoint, in Bromley, south east London, had “expressed concern that we may seek to profit from leaseholders’ predicament, should they be forced to walk away from their leases, by carrying out the necessary work ourselves in order to profit by re-selling the leases”.

“The purpose of this letter is to provide our unequivocal reassurance and commitment that we would not seek to profit from leaseholders’ misfortune in this way.

“To do so would not only be abhorrent to us but, moreover, not in accordance with the operating standards required by our lenders and shareholders.

“It is my hope that this letter addressed to you, as their MP, will remove this concern from leaseholders.”

The issue of Northpoint leaseholders facing extremely high cladding costs – there are only 57 of them – featured on the Guardian website yesterday.

Leaseholders at building in London face having to pay £70,000 each to make it safe

The Tchenguiz group’s forthright statement stands in contrast to other commercial freehold investors – Long Harbour and Pemberstone, for example – which have left matters to run in the courts.

Last week the Tchenguiz group said that the government’s threats to make freehold investors pay for taking down inflammable cladding that was put up by developers and passed by regulators was a “hollow threat and it knows it”.

If freeholders now publicly state – as the Tchenguiz group appears to be doing – that they will not forfeit leaseholders’ homes to make them pay to remove cladding, there is now additional pressure on government to act.

In total there are 272 private blocks with inflammable cladding, of which 29 have been resolved, while 69 have no plans in place to remove the cladding.