Donate
You are here: Home / Latest News / Why should Will Astor, Tchenguiz etc be paying to remove Grenfell cladding? 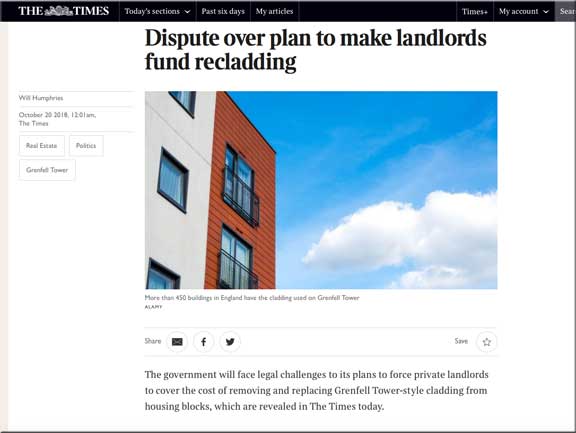 Government plans leaked in The Times to force residential freehold speculators to pay to remove Grenfell cladding from private blocks are doomed to fail.

They are the latest in a series of disastrous announcements, which followed Communities Secretary James Brokenshire reneging on his predecessor Sajid Javid’s promise to reduce new ground rents to as low as zero.

Where freeholders are refusing to pay for cladding removal, the government intends to force the works to be done and reclaim the money from the “building owners”: that is, the freeholders.

A spokesman for Communities Secretary James Brokenshire told the Times (although these quotes were not published):

“We’ll pay local authorities to step in and do the remediation. They’ll recoup the money from building owners by placing a charge on the building (or similar).

“We’ll do this first for buildings with partial cladding. Then we’ll expand to other buildings with more extensive cladding – although we’d expect the first step to have an impact and reduce the number of buildings requiring this action.

“Councils would use existing enforcement powers to intervene with a building carrying serious safety concerns and recoup costs. This would be a new way to use that enforcement power, and as such there is the potential for a legal challenge, but James Brokenshire is prepared to fight for residents in the courts if needs be.

“Leaseholds and freeholds are contracts, but in many cases these are highly complex and don’t make it easy to attribute liability. Those contracts’ legal constraints add more complexity which makes it hard to enforce remediation.

“That’s why we’re stepping up and working with councils to fund the use of their enforcement powers.”

LKP cannot see any more reason why the freeholders should pay up than the leaseholders: this is a dispute between developers and government, which creates the regulations.

Here is a pod cast by Inside Housing with Martin Boyd and Jim Fitzpatrick MP, saying 20,000 homes affected by Grenfell cladding issue:

The freehold owners would have to challenge this idea, or the future value of the income stream in these freeholds would be fatally undermined.

In addition, it would set a precedent for further cash calls for building flaws  – fire doors, compartmentalisation, asbestos etc – that emerge in the future, and trash the value of freeholds.

That would be calamitous for leaseholders as the proposal destroys any incentive to enfranchise and be responsible for the building in which they have the majority financial share (as well as being a disaster for those who already own their freeholds).

“In almost all circumstances, the cladding replacement costs will be more than what the freehold or headlease asset actually worth.

“The site itself has a rebuild valuation of about £150 million. If it had cladding, which fortunately it doesn’t, it might cost at least £4 million to replace it, given the size of the site.

“So, that’s four million times more than the value of our freehold (the “building ownership”) and at least four and a half times the value of the headlease.”

The government’s idea would also mean that Slough Council would have to take enforcement action against itself, as it bizarrely purchased the  freehold of Nova House off freeholder Robert Steinhouse for £1 in an unexplained deal.

It is, at present, apparently seeking payment from the leaseholders.

The proposals were aired in the Times exclusively, presumably in order to test the water, and backtrack if necessary.

The government approach seems to be to threaten freeholders – who it sees as “building owners”, when they are simply the owners of a building’s legally enforceable income streams – from further participation in existing government housing schemes, especially the Home Building Fund and Help To Buy.

Neither involves freehold owners, who won’t be bothered.

It may work with developers, and perhaps has already done so. Barratt, Taylor Wimpey, Mace and Bellway have undertaken to remove cladding, with Lendlease and Ballymore saying they won’t be paying up.

There might be another possibility: is the government exploring some sort of deal to water down the leasehold reform agenda to get the freehold speculators to pay for cladding removal?

It is also fatal to the advancement of commonhold tenure, which exists for apartments in virtually every jurisdiction in the world apart from England and Wales.

In endorsing ground rents, Mr Brokenshire is approving speculative investments in ordinary families’ homes that are for no defined service whatsoever.

Ministers have repeatedly exhorted developers and freeholders to “do the decent thing” to remove cladding from private sites.

To date the only freehold owner that has undertaken to pay to remove Grenfell cladding is Legal and General, which has committed to pay out £12 million for the Blenheim Centre / Resolution apartment block in Hounslow. We wholeheartedly applaud this, coming from a company with a genuine sense of corporate social responsibility.

L&G is hardly on the same level as private equity speculators – such as the Adriatic Land variations – hiding their beneficial ownership of a slice of people’s homes behind nominee directors in companies often offshore. (It is, perhaps, a bit churlish to point out that  L&G was in for a big bill in any case as it owns the shopping centre on which the flats stand.)

The property tribunal has considered three cladding cases and ruled that the leaseholders should pay to remove it, not the freeholders.

Fresh building is to pay £100,000 for fire marshals … with more Grenfell bills to come

The Leasehold Knowledge Partnership does not habitually speak up for Vincent Tchenguiz, but why should he be asked to pay to remove the cladding at Citiscape in Croydon?

He owns the ground rent income and the freehold of the building, but the management contract was sold off to the management group FirstPort and the income from the site is small.

Why should he pay anything at all? Especially as the tribunal has said he needn’t do so?

Were he to do so, why should he not pay for other flaws in the building in the future?

The government’s approach to this is a flawed understanding of what a freehold owner is: he is a speculator in the income streams of a building.

He is absolutely not its professional long-term steward. Indeed, the physical state of the building has no relevance to the legally enforceable income he can receive from it.

That is why freehold speculation in people’s homes should end.

Mr Brokenshire could pay regard to how Taylor Wimpey intervened at Glasgow Harbour, which also has Grenfell cladding.

Here, there is no speculative freeholder as leasehold does not exist in Scotland. So the dispute was between the flat owners and the builder – with no intermediary – and Taylor Wimpey, to its credit, has paid up.

In contrast to the Westminster government, which seems not to understand even the basics of leasehold tenure in this country, the Australian government has responded intelligently to the Grenfell cladding disaster.

It has 100 buildings with cladding, and is issuing low interest loans to replace the material.

Of course, in Australia the social responsibility aspect of the loans is unquestioned, because the money goes to the flat owners, who own the building through commonhold strata title.

In merrie old England, where the idiocy (and worse) of leasehold landlordism holds sway, lending money to a murky offshore private equity outfit, would be more difficult to justify to the public:

Reaction to Grenfell and Combustible Cladding – a note from Australia

Problems associated with external wall cladding products became apparent in Australia in 2014 when a fire escalated quickly up the external façade of the Lacrosse tower in Docklands, Victoria.

LKP predicts the future
Next Post: Government thinking freeholders are paternalistic long-term custodians of a building is where it has gone wrong over Grenfell cladding