Donate
You are here: Home / Latest News / Fresh building is to pay £100,000 for fire marshals … with more Grenfell bills to come

The 120 leaseholders at the Fresh building in Salford have been ordered to pay the £100,000 fire warden bill after Grenfell cladding was found at the site.

The decision last week comes before a similar concerning Citiscape, Croydon, scheduled next week, where the freeholder is Vincent Tchenguiz’s so-called Tchenguiz Family Trust, based in the British Virgin islands.

The vineyard-owing business man featured in The Sun last summer as a “fat cat” speculating in the homes of ordinary people through the many opportunities provided by leasehold tenure.

A FATCAT boss involved in the leasehold scandal lives in one of his company’s newbuild homes. But he has avoided the rip-off ground rent fees that have ruined the lives of other homebuyers. Ted Ayres, chief executive of property giant Bellway, bought his smart new home on a development in Kent, in December for £400,000.

William Waldorf Astor, heir to the viscountcy, was given the same treatment, as his £1.6 billion Long Harbour fund holds one of the largest investments in residential freeholds.

At Heysmoor Heights, in Toxteth, Liverpool, leaseholders face bills of £18,000 each and Long Harbour has provided a £750,000 loan to cover the fire warden costs.

The Manchester Evening News reported the case at Fresh, quoting a leaseholder whose service charges have risen from £125 to £360 a month.

Far higher sums are likely when it comes to removing the Grenfell cladding.

If these costs fall on the leaseholders it is inevitable that leaseholders will lose their homes through lease forfeiture – a galling prospect at Heysmoor Heights, where ground rent speculators hide their beneficial ownership behind a Guernsey company, Abacus Land 4 Limited.

A spokesman for E&J is reported in the Guardian saying:

“These works are essential and urgent, but we absolutely recognise the significant cost to leaseholders. We will do everything we can to keep costs to a minimum, but the safety of the residents is our absolute priority.

“We are now loaning short-term funds to the service charge account to help cover the additional costs currently being incurred, and we are working with a number of stakeholders to try to find a longer term solution to help leaseholders in meeting these costs.”

James Tuttiett and his colleagues: 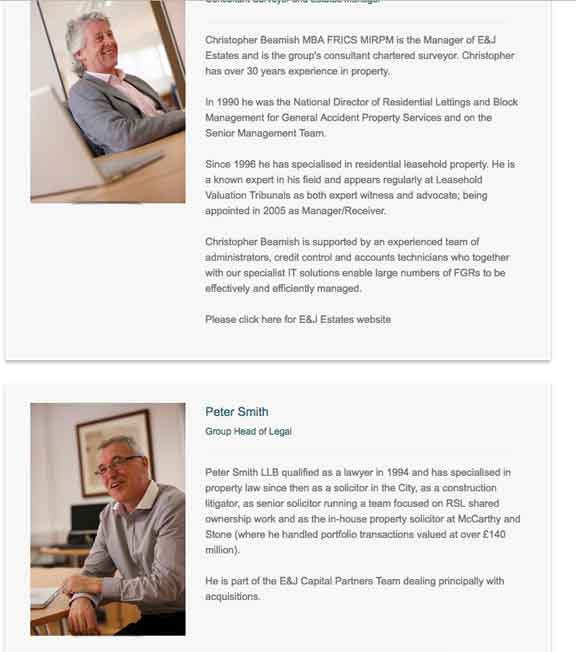