Donate
You are here: Home / Latest News / ‘Gargantuan’ Grenfell cladding bills from Astor and Tchenguiz on sites such as New Festival Quarter, The Times reveals today 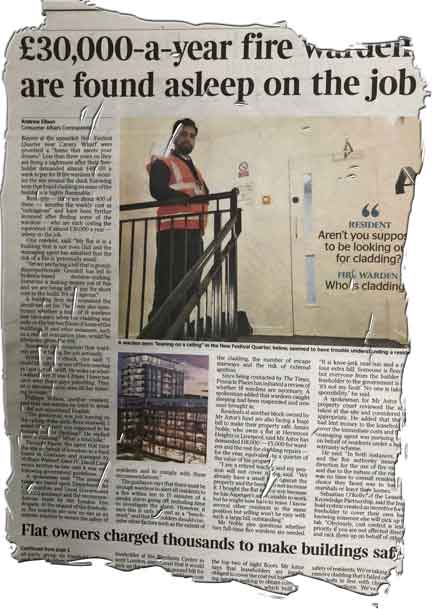 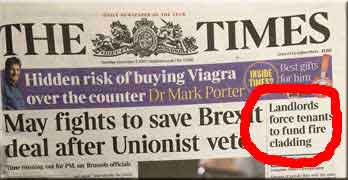 The Times today reports how leaseholders are facing “gargantuan” bills for fire marshals and Grenfell cladding removal from the likes of Vincent Tchenguiz and Will Astor.

Up to a 100 private blocks of flats are affected, it claims.

“The situation has echoes of a leasehold scandal this year when construction companies sold houses with ground rents that doubled every ten years, leaving owners with unsellable properties,” wrote Andrew Ellson, the consumer affairs correspondent.

Jim Fitzpatrick, Labour MP for Poplar and Limehouse and a patron of LKP, is quoted saying: “Leaseholders are too often subject to unreasonable charges and the process to challenge them is difficult. The cost residents face to make their home safe show the system is failing.”

“Surely freeholders can dig into their pockets to pay something towards these gargantuan bills?

“They receive considerable and undeserved income from ground rents and other charges after all.”

The Times article features New Festival Quarter, near Canary Wharf in London’s Docklands, where the freehold is owned by Adriatic Land in Will Astor’s Long Harbour fund.

Some residents claim the marshals do very little, cost a fortune and dose on the job.

Mr Astor claims the leaseholders are “legally obliged to cover the cost” of fire marshals and removing the cladding , says the Times, but it is trying to get compensation from housebuilder Bellway.

The Times also referenced Citiscape in Croydon, where Vincent Tchenguiz’s interests are the freeholder. These interests are ultimately owned by the so-called Tchenguiz Family Trust in the British Virgin Islands.

New Festival Quarter is described as being owned by a fund based in Guernsey.

The article also features Heysmoor Heights in Liverpool, where residents say “Mr Astor has demanded £18,000 – £5,000 for wardens and the rest for cladding repairs – for the year”, equivalent to a quarter of the properties’ values.

A spokesman for Mr Astor is quoted saying that here, too, the freeholder is pursuing a claim against the original builder.

LKP has established that the freeholder is also offshore, Abacus Land 4 Ltd in Guernsey.

“Sebastian O’Kelly, of LKP, said the leasehold system created an incentive for the freeholder to cover their own back, knowing someone else will pick up the bill.

‘Obviously, costs controls are less a priority if you are not affected directly and rack them up on behalf of others.’ ”

Taylor Wimpey passed management at Surbiton Plaza II to commercial operator ‘to save customers the administrative burden’ (of being in charge of their own money)
Next Post: Commons debate on leasehold December 21