Donate
You are here: Home / News / Bellway and Peabody cave in over Grenfell cladding costs at New Festival Quarter

Bellway “as a responsible developer” is meeting the bill

… So what about the not-so-responsible Lendlease and Ballymore? 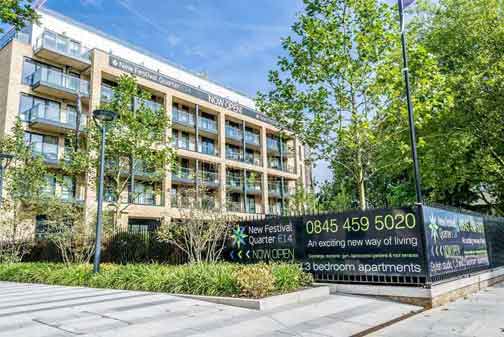 In yet another triumph of leaseholder activism, Bellway and the Peabody Trust have caved in over the Grenfell cladding costs at New Festival Quarter.

The east London site in the constituency of Jim Fitzpatrick, Labour MP for Poplar and Limehouse and patron of LKP.

Martin Boyd, LKP chair, has liaised with the leaseholders working through the options when confronted with a Grenfell cladding bill.

LKP is also the only organisation that has attempted to get together all the leaseholders caught up in the Grenfell cladding issue, holding an APPG with housing minister Kit Malthouse in July.

Bellway says in a statement today:

“Although the buildings were signed off as having met building regulations at the time of construction, we recognise there are concerns surrounding cladding following the Grenfell fire and, as a responsible developer, we want our customers to have peace of mind that the cladding will be replaced.”

Although Bellway says it will be working with freehold owner Adriatic Land 6 (GR1) Limited, part of the Long Harbour fund, there is no suggestion that anonymous and hidden beneficial owners of this entity – almost certainly private equity individuals – will pay any part of the cladding bill.

Nor is it clear whether the warranty provider NHBC will pay anything, either, although it is mentioned in the statement (in full, below).

Bellway says in its statement that work will start in the summer of next year.

But here are two developers who say they won’t be paying: