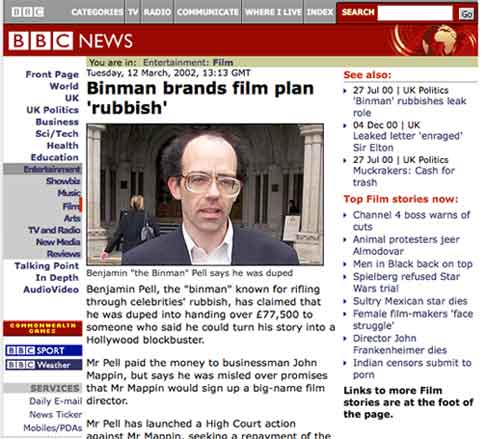 Slough Council – which made the unaccountable decision to buy the freehold of Grenfell cladding site Nova House for £1 – was in tribunal earlier last week against a formidable opponent, Benjamin Pell, better know to journalists as Benji the Binman.

Mr Pell, who came to national attention after raiding the dustbins of London’s leading law firms for celebrity stories, is leading the leaseholders’ resistance to Slough dumping on them a £317,500 bill for fire marshals.

The council will be back in tribunal to get a ruling on paying up for the cladding itself early in the new year. That is, unless it heeds Communities Secretary James Brokenshire’s demand – repeated last week – that freeholders should not dump these costs on leaseholders.

Both court actions are fiercely resisted by Mr Pell, or rather by Pell Buy It Investments Limited, owned by his 86-year-old mother Rita, which is one of the 68 leaseholders.

The Pells argue that the bill for the fire marshals and the cladding removal are the same issue, and that the council ought to be suing the warranty providers BLP/Allianz, which has denied liability

Almost £350,000 was spent in six months by Slough Borough Council on a private 24-hour fire crew outside a tower block with dangerous cladding. The council’s spending was in response to growing safety concerns over Nova House in Buckingham Gardens. It failed a Government-backed cladding …

Nova House may not be eligble for £400m government cladding fund

A £400m Government pledge to remove dangerous cladding from tower blocks may not apply to a building in Slough with the same cladding material as Grenfell Tower. Prime Minister Theresa May announced on Wednesday, May 16 that the Government was committed to spending about £400m to pay for…

“It is a new build, we purchased our apartment off plan, we paid a premium to obtain the BLP policy and yet it is a building with thousands of defects.

“It would be an affront to justice and common sense if we were now asked to pay to rectify the building or make any contribution whatsoever to any measures that need to be taken to keep it safe.”

When the build defects at Nova House were exposed in the summer of 2017, the freehold was transferred from Freehold Properties 42 Limited (now part of E&J Ground Rents No 23 Limited) to Ground Rent Estates 5 Limited.

It was this entity that Slough Council decided to buy for £1 in an unexplained decision.

“In no part of their original Statement Of Case or in their Reply to my Statement has the Applicant ever revealed to the Tribunal the reason why Ground Rent Estates 5 Limited is now owned by Slough Borough Council,” says Rita Pell in her witness statement.

Mr Pell is an extraordinary character, who turned to bin-raiding after his ambitions to become a lawyer failed to take off.

The bins yielded a flow of celebrity stories, including the likes of Elton John and cash for questions former Tory MP Neil Hamilton. It provided Mr Pell with a £100,000 a year income, although he claimed it was, in fact, a more probable £25,000.

Mr Pell was the subject a TV documentary, but a feature film of his exploits failed to take off.

In representing the leaseholders, many of whom are overseas investors, the Pells were assisted by two pro bono barristers, Cheryl Jones and Antonida Kocharova.

DEVELOPERS associated with a building that failed multiple fire safety tests are to receive more scrutiny from the council – as they plan a new development just across the street. The cladding at Nova House, in Buckingham Gardens, Slough, failed fire tests in the wake of the Grenfell Tower blaze last year.

Slough Council engaged Liverpool debt collectors JB Leitch and barrister Simon Allison, who were the legal team for the landlord for the two tribunal cases concerning the Manchester / Salford sites, Vallea and Cypress Courts, and the Fresh Building.

The Pells say: “Slough Borough Council’s conduct via its vehicle Ground Rent Estates 5 Limited has been of great interest to the public ever since they purported to save the day at Nova House and look after the long leaseholders’ and residents’ interests.

“This is a council which clearly has a lot to hide.”

The witness statement references the “well respected website” the Leasehold Knowledge Partnership, and the contributions of Martin Boyd and the comment poster “Chas”, who saw through Slough’s evasive PR-speak to question whether the council was going to dump the cladding costs on the leaseholders.

The witness statement also quotes councillor Rayman Bains, saying that Slough’s decision to buy the freehold of Nova House was “nothing more than a PR stunt and didn’t have the support of the entire cabinet at the time”.

A judgement is expected as early as next week, and Mr Pell anticipates defeat.

However, whatever the fate elsewhere of Mr Brokenshire’s pleas that ground rent speculators pay to make good buildings where they own the freehold, this may be taken more seriously by Slough Council.