Donate
You are here: Home / News / Cladding scandal / Brokenshire tells freeholders to pay up to remove Grenfell cladding. But how can that work? 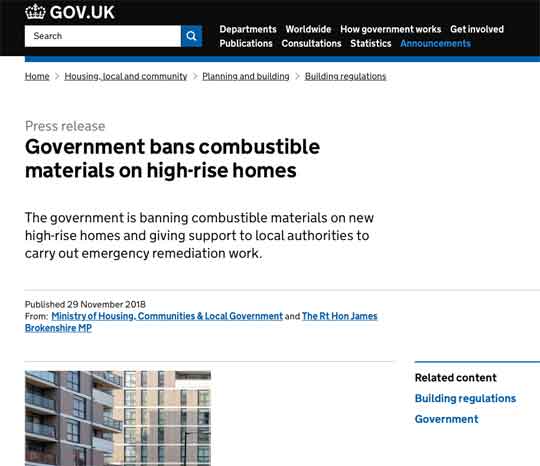 The government is persisting with its argument that “building owners” must pay up to remove Grenfell cladding from their sites – even though the law has said that they don’t pay, leaseholders do.

“Local authorities will get the government’s full backing, including financial support if necessary, to enable them to carry out emergency work on affected private residential buildings with unsafe ACM cladding.

“They will recover the costs from building owners. This will allow buildings to be made permanently safe without delay.

“The government is already fully funding the replacement of unsafe ACM cladding on social sector buildings above 18 metres.

“Everyone has a right to feel safe in their homes and I have repeatedly made clear that building owners and developers must replace dangerous ACM cladding. And the costs must not be passed on to leaseholders.

“My message is clear – private building owners must pay for this work now or they should expect to pay more later.”

It is uncertain how this works.

The warranty provider NHBC is paying up at New Capital Quay, built by Galliard, although it may be the developer is stumping up for some of this.

But it is difficult to see how a company such as Pemberstone Reversions (5) Limited finds several million pounds to remove cladding at Cypress Place and Vallea Court.

That leaves aside the property tribunal has ruled that it does not need to do so in the first place:

Australian giant Lendlease built the sites, and could sub the freeholders.

But what of Heysmoor Heights, in Liverpool, where the builder long went bust, and the freehold is owned by anonymous beneficiaries of Abacus Land 4 Limited in Guernsey, which is part of the Long Harbour fund?

If freeholders have a whip round and get the government out of this mess, what will they expect in return?

The government announcement is excellent news for the leaseholders in Nova House in Slough, where the council in an unexplained arrangement acquired the freehold for £1 – a freehold for which freeholder Robert Steinhouse had earlier paid £455,000.

Somehow or other, one suspects the leaseholders at Nova House – apparently many Singaporean and Hong Kong investors among them – will get their cladding removal paid for by taxpayers. They were in tribunal yesterday disputing the costs to pay for fire marshalls.

But that owes more to the astonishing stupidity of Slough Council, rather than Mr Brokenshire’s repeated exhortations that “building owners” pay up.