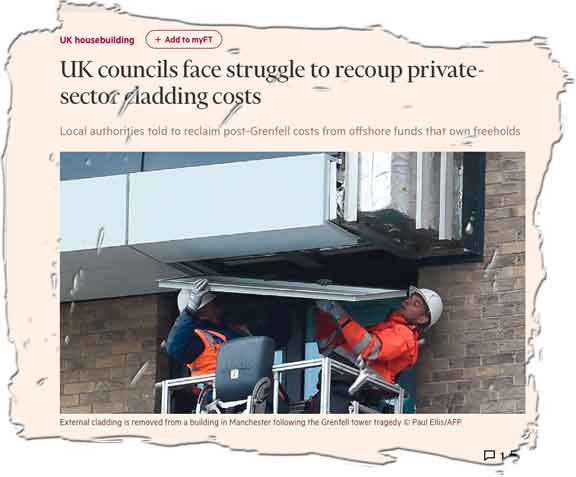 The FT today reports that government hopes that speculators in residential freeholds – especially anonymous ones hidden offshore – are unlikely to pay up to remove Grenfell cladding.

The article coincided with reports of Places for People, freeholder of Leeds Saxton, issuing a non-repayable loan to leaseholders and pursuing a claim against warranty provider NHBC. Places for People acquired the freehold in 2013, but it is unknown at this stage whether developer  Urban Splash will be contributing to this cost. 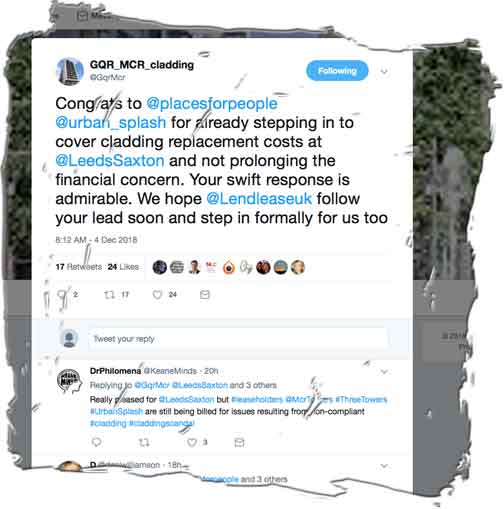 Communities Secretary at DHCLG James Brokenshire last week said local authorities would have “full backing, including financial support if necessary” to reclad private buildings, adding “They will recover the costs from building owners.”

This means that the government still somehow believes that the freeholders should pay for cladding removal, even though in every case that has come before the property tribunal the bill has been – inevitably – dumped on the leaseholders.

Of 289 private-sector buildings in England – some in the same complexes – that are more than 18 metres high and clad with the flammable material, 102 have no plans in place to replace it.

Mr Boyd said that ground rents offer a relatively small income stream and investors buy the assets for a fraction of the multi-million-pound cost of the recladding.

While Barratt and Taylor Wimpey have paid to reclad buildings they constructed, even where they no longer own the freehold, and Taylor Wimpey has set aside £30m this year for that purpose, others such as Lendlease, Berkeley Homes and Ballymore, have so far refused to pay.

The FT article also quotes Susan Bright, professor of land law at Oxford University – who has spoken at several LKP meetings – saying in a blog post: “It is not clear why all freeholders, particularly if not the developer or original owner, should have to pay . . . We are talking about a problem caused by a systemic failure in fire safety regulation and construction methods and standards.”