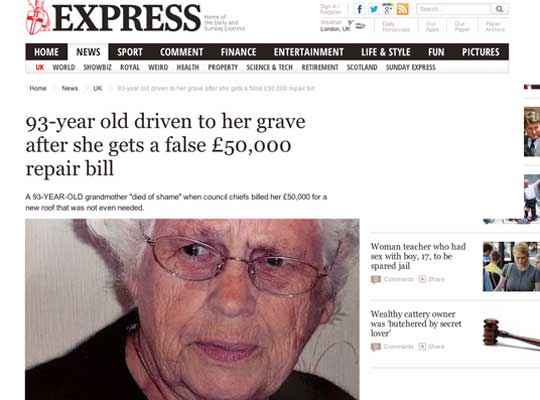 The family of a woman, aged 93, who died in her ex-council leasehold flat blames the council causing her death by submitting a “guesstimate” £50,000 bill for a new roof.

It now appears that an LVT has accepted a surveyor’s report that the roof might have lasted another 40 years.

Florence Bourne died in her first floor flat in Newham, North London, which was covered in scaffolding for the unnecessary repairs.

Indeed, her family told the Express newspaper that she died of a heart attack after being startled by a falling tile when she stepped on to her balcony.

Her son Roy Bourne, 65, is quoted as saying: “”I was sitting there next to her on the day before she died and all she could say to me was, ‘I’m so sorry, son, I’ve left you with such a debt’.

“For a woman that was proud, who had served her country and who had always lived as we all should live, honestly and decently, that was a horrific way to die.

“She was so independent it was a job to get her to accept help even from her own family.  She died of shame because she thought she’d left the family with a massive debt [for the roof]. It’s the last thing she’d ever want.”

The case highlights the perils that can face those who buy their council flats.

Councils are notoriously spendthrift on repairs of their property. While the bills aren’t paid by the council tenants, they are by those who have bought the property.

They then discover that they have very limited protections under leasehold law when councils start issuing eye-watering payment demands for repairs.

The LVT said: “No survey or other expert evidence is provided”, adding that it was “satisfied that the existing roof remained in reasonable condition with a remaining life of 40 years and that it was not reasonable to replace it in 2010”.

Florence was a constituent of Eric Pickles, Secretary of State for Communities and Local Government.

He is quoted: “We are looking into this problem and trying to find out how widespread this problem is across the country. Newham had a duty of care to exercise proper control over what happens to those properties.

“Either they were excessively and supremely incompetent or they didn’t care.”

LKP thanks Nigel Wilkins, of CARL (Campaign Against Residential Leasehold) for bringing this case to our attention

All change for Leasehold Valuation Tribunals on July 1
Next Post: Hopeless case on course to RTM … »