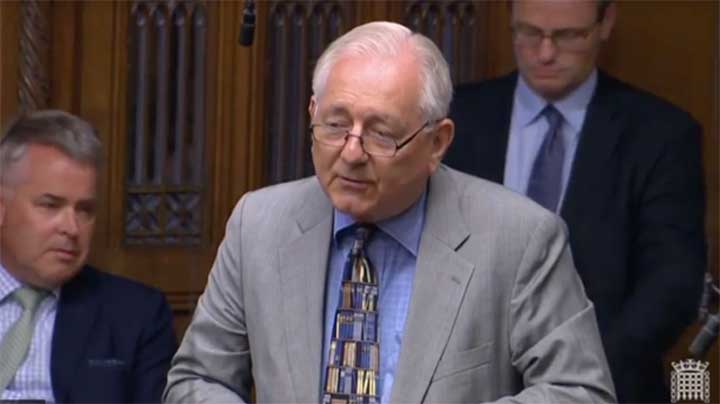 Mr Barwell, a former housing minister, was set to present an award to LKP heads Sebastian O’Kelly and Martin Boyd at a reception in Parliament on Monday but was unable to attend due to urgent travel.

“I thank the Prime Minister and her chief of staff Gavin Barwell for all that they have done, with the Secretary of State for Housing, Communities and Local Government, on residential leasehold reform; there is now a prospect of ending unfairness and exploitation.”

Beyond leasehold concerns, Sir Peter used the opportunity to ask the prime minister about policing.

Mrs May did not directly respond to his remarks on leasehold reform.

Meanwhile, Harlow MP Robert Halfon launched a blistering attack on Persimmon over poor build quality. He has demanded his constituents get full compensation:

“On Saturday, I met a group of residents in Harlow, many of them on Government Help to Buy schemes, who moved into homes built by Persimmon Homes that are shoddily built with severe damp and crumbling walls. In the eyes of my residents, Persimmon are crooks, cowboys and con artists. Will my right hon. Friend the Prime Minister hold the company to account, ensure that residents receive proper compensation, and urge the chief executive to come to Harlow to meet the families who have suffered so much? Persimmon Homes should not behave in this way.”

The prime minister accepted that the volume housebuilders have to up the quality of the properties they sell:

“My right hon. Friend raises a very important issue. As we increase the housing supply, it is important that the quality of new build homes continues to improve. We set out in our housing White Paper an ambition and a target of a housing market that works for everyone. We expect developers to deliver good-quality housing. We have already announced our intention for a new homes ombudsman to protect the rights of homebuyers and to hold developers to account. We expect all developers to build their homes to a good quality standard. These are homes that people will be living in for many years. They deserve those standards.”

In response to the programme, Persimmon conceded “that on too many occasions in the past we have fallen short. We apologise without reservation to the customers featured in this programme.”

LKP understands that Cath Williams, one of the three house lessees running the National Leasehold Campaign, assisted Channel 4 researchers with the documentary.

‘I don’t see why houses are sold leasehold,’ says prime minister. Is this the final nail?

Number 10 chief of staff Gavin Barwell ‘delighted’ to be invited to present award to LKP
Next Post: Will Lord Best’s regulator help break the power of freeholders over their leaseholder victims?